The Years of War

In THREE SOULS, character of Baizhen was partially based on my Grandpa Chang. I imagined what it might've been like for an educated and sophisticated young woman to find herself married to an underachieving stranger. But in THREE SOULS, Baizhen had more redeeming qualities than Grandpa. One of my brothers said this was a good thing, to portray our ancestor in a more positive light. Enjoy.

M y father once told me that his most enduring memory of his own father was of a sedan chair setting down at the front gates of their house in Pinghu and his father falling out of it, quite drunk. This happened rather often. Many evenings before supper, his mother would send a servant out to find her husband and bring him home from whichever teahouse he had been patronizing that day. This was the signal for the gatekeeper and a couple of servants to hang about the front gates, for inevitably, within a half hour, they would be helping my grandfather stumble his way out of the sedan chair, getting him indoors before the neighbors could comment on his intoxicated state. 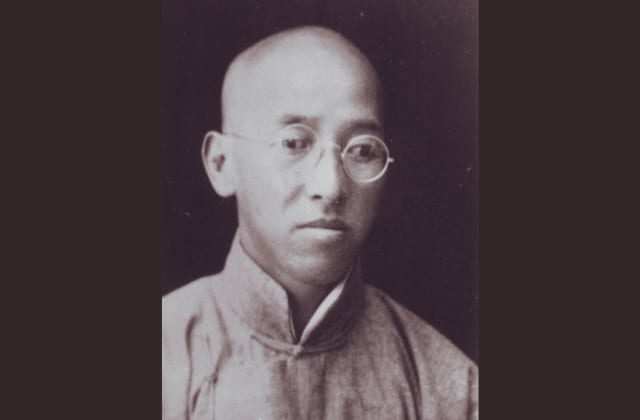 He was an only son, and so was his own father, which explains much about their upbringing. The family indulged these two generations of only sons beyond the bounds of common sense. As a result, neither was able to add much to the fortunes of the family except through marriage.

What little education Yangze received was based on the Chinese classics, given at home by a second-rate tutor. Neither of his parents paid much attention to his education because they didn’t think he would need a vocation, and thus he was allowed to do as he pleased. He was mentally lazy, and this character trait, combined with the manner of his upbringing and the changes taking place in China, ensured that he was totally unequipped to live in the twentieth century in any useful way.

It was only after he married my grandmother and came under the influence of her family that Yangze attended a real school. From what my father can recall, it would seem that Yangze attended three schools in all. One was the Nanyang Superior Trade School, and another the Central China Industrial School, both famous for turning out many prestigious graduates. But if one added up all his years of education, it’s unclear how much schooling Yangze actually achieved; in fact it is fairly safe to assume that he never graduated from any school at all. Nonetheless when he wrote up his resume, he proudly attested to his time at those institutions.

After these attempts at improving his education, he made desultory attempts at a career. In his first effort, he went away to Tianjing to work for the telephone company, a job arranged through friends. But he missed the comforts of home, and so he returned to Pinghu after a short while. His father, who had pulled the strings to get him this job, never berated him for his lack of perseverance.

Then for a time, Yangze taught classes at the local primary school, and he often said that this was the best work he ever found, because he could live in Pinghu, and bring home ten silver yuan, each month. On payday he would proudly give a few coins to his wife for her personal use. Why he left the position is not clear but we suspect he found it hard work shouldering the responsibilities of even a small village school.

Yangze had spent much of his childhood in idle conversation with elderly relatives and servants. He learned about our ancestors from a household that took refuge in the past, where family stories seemed more real than the confusing events of the world outside. In his adulthood, he amused himself by acquainting his children with the deeds of Chang ancestors, reciting these same tales while they sat around him in a circle of low bamboo stools, sucking on the salty-sour dried plums he handed out to ensure their attention.

Thus you could say that Grandfather Yangze’s idle life was the means by which our family tales were preserved, for he passed on to his children the only knowledge he had spent any effort acquiring: the histories of our ancestors.

If he hadn’t done so during those few years when his children led carefree lives, the stories might have been lost. When Yangze’s children started middle school, they were instructed by their mother wife to apply themselves completely to their education. So they immersed themselves in schoolwork and in doing so, put aside the amiable childhood hours spent with their father. When my father and his siblings entered their teens and left Pinghu for boarding school, they were to come back only for brief visits and after a while not at all, because war had broken out. After the war was over, stories about the past seemed irrelevant, for China was a changed country.

It was his reputation as an insignificant drunk that allowed him to survive the purges in the years to come. While other members of the family were being persecuted, Yangze wandered through his final years seemingly oblivious to the dangerous political currents sweeping through China. During the Cultural Revolution, he was sent to the local Party official for indoctrination, but always neglected to show up at the appointed time. His various excuses ranged from ingenious to downright ridiculous. The Party official, a long-time resident of Pinghu, simply gave up trying to make over Grandfather’s political views. Irrelevant, ignored and unwatched, Yangze was the one who safeguarded a few legacies for us.

And so in hindsight, we have profited from his idle life because it is through Grandfather Chang Yangze that three family legacies still remain. The first was the copy of our family genealogy, the second a painting by a famous artist. The third and most valuable was his accumulation of family stories. I will write about our family treasures in another blog.

Let me put some context around my Grandpa Chang's life. My father’s family was extremely traditional. They practiced ancestor worship, deferred to their elders, and followed Confucian ethics. So when the family reluctantly admits that Grandpa Chang was a loser, it’s probably an understatement. He never finished school, couldn’t keep a job, and had a tendency to fall out of sedan chairs after a bit too much to drink. There isn’t much whitewashing you can do for a man's reputation when he doesn't give you much to work with.

Here is some more context: that same traditional family assumed he would never have to work and let him do as he pleased. Thus, his natural laziness was allowed to take charge. China was changing but my great-grandparents could not see the need for change. Grandpa was like many others of that generation. His parents had raised him to function a world that no longer existed by the time he was an adult. He was so unprepared for the 20th century you can’t really blame him for giving up.

Even while admitting that he was a colossal failure and a disgrace to the family, my father and uncle never spoke of Grandpa with anything but fondness. They laughed when they told stories about him, in tones touchingly devoid of mockery, as though he had been an incorrigible younger relative. For all his laziness, Grandpa was an amiable person, given to bursts of impulsive generosity, and they found it hard to blame him for the family’s decline when war and social change had wreaked far more disruption on their lives.

If you like this blog, please do me the honor of sharing it on your social media. Leaving a comment is great, too!  -- Janie