In THREE SOULS, the artificial mountain makes an appearance. Enjoy.

M y six-times-great-grandfather Chang Shiho was born during the reign of the Kangxi Emperor, outlasted two more emperors, and went down in family archives with great distinction. After all, not many families can lay claim to ancestors who have become immortal (see blog: The Ancestor Who Saw a Dragon). But even if he had never encountered the supernatural, there would have been many tales about Chang Shiho.

His charity towards those who did not belong to his own clan would have seemed needlessly, if not incomprehensibly, virtuous. His wanderlust would have been remarked upon by his contemporaries as unusual. Proof of his eccentricity, visible to all who passed by our home town of Pinghu, was his extravagant landscaping project: the artificial mountain. 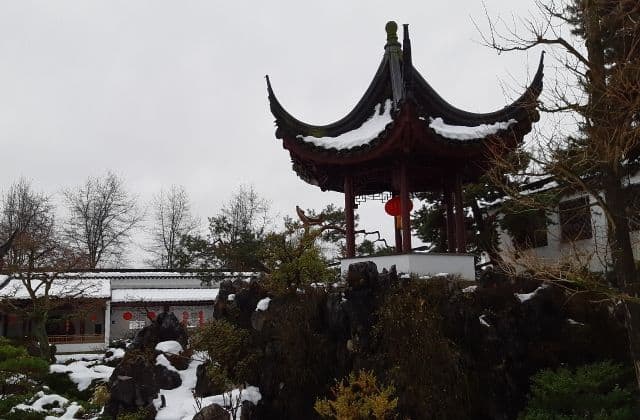 One reason for this monumental undertaking was Chang Shiho’s love of gardens. Gardens and landscaping were gentlemanly pursuits. Throughout the centuries there have been entire anthologies devoted to the design of Chinese gardens, often punctuated with lines of poetry to convey with even more sensitivity the desired effect of the perfect garden. The planning and building of a classical garden was a hobby befitting wealthy gentlemen scholars. In the process of designing a garden they could appreciate more keenly the superior genius of nature, and the resulting creation would provide inspiration for more paintings and poetry.

But Chang Shiho aimed higher. Unlike Suzhou-style rock gardens, where rocks represented mountains, he wanted an actual mountain, one large enough to require a small journey to ascend. He felt that such a mountain would create an interesting diversion for the womenfolk of his family. When his wives chided him for journeying to remote and dangerous parts of China, he would reply with the old proverb “Travel abroad is more useful to learning than studies at home”, and ask if they did not enjoy listening to the tales of his travels. While they did listen to his stories with great interest, the women’s main response was to worry about the dangers that might befall him on the road, from bandits to blizzards.

Sheltered within the inner courtyard, the women were unable to comprehend the lure that travel held for Chang Shiho, for to them, wild landscapes and primitive border towns rightly belonged in books. He wanted them to share something of the wonder he felt when gazing across seemingly endless horizons.

In those days, our family owned some land on the outskirts of Pinghu and Chang Shiho decided to locate his mountain there, enclosed within a private park of Suzhou design. Hoping such a project would keep him occupied at home for longer periods of time, his wives encouraged this endeavour.

He invited from Suzhou a landscape designer named Ruan Yunling, who was also a renowned painter. Ruan lived intermittently at the Chang estate in Pinghu for several years while designing and supervising the building of the mountain and its adjoining park.

But alas for his wives, the artificial mountain didn’t keep him home. The project gave Chang Shiho more excuses to travel. He made trips to find interesting rocks and plants for his park. He even sent his gardeners afield to locate specimens. It became a common sight for the townspeople of Pinghu to see a convoy of oxen coming down the main road, dragging pallets weighed down with heavy, straw-wrapped objects.

When the great landscaping project was complete, all agreed that it was a triumph. Within the park, Chang Shiho and Ruan had followed classic Suzhou garden design, cleverly using winding paths and visual obstructions to create a garden that seemed endless to those walking in it.

Even more cleverly, the artificial mountain itself was designed using those same principles of indirect access and obstruction, but extended to vertical dimensions so that a person climbing its paths would never see too far ahead or too far above until he finally reached the summit. In this way, although the mountain itself was no higher than a ten-story building, it seemed much taller to when walking to the top.

Chang Shiho named this place Yin Shan, Infant Mountain, because it was no more than a small imitation of a hill. Infant Mountain stood at the far end of the park, rising so gradually at first that if you walked toward it and did not raise your eyes to see the mountain, it would seem only as though the ground was elevating slightly to reach another level of the garden.

A path spiraled its way up Infant Mountain’s broad, mounded contours, enlivened by beautiful plantings of trees and flowering shrubs. The mountain became famous for its collection of azaleas and rhododendrons, collected from all over China. Strange rocks with rough textures provided contrast to the smooth stalks of bamboo growing behind them. Here and there were rustic pavilions where visitors could pause to rest and admire the scenery. Some pavilions were just thatched roofs on posts, but always carefully situated to enhance the view, for a Chinese landscape is considered incomplete if it lacks a pavilion or hermit’s dwelling peeking out of the trees. From the summit of Infant Mountain, one could see the ponds and gardens of the park below, the entire town of Pinghu curved around the lake that gave the town its name, the river that bisected the town, and even the dusty faraway hills that marked the boundaries of the next village.

My father said that our family once owned a series of watercolor paintings titled “Ten Views from Infant Mountain”. Mounted on a long scroll, now lost to us, the paintings showed ten vistas as seen from the numerous small pavilions of the artificial mountain.

There were days when Chang Shiho’s wives reserved the park for their own use, for there the women could stroll about as freely as in their own private courtyards, removed from their normal surroundings, yet still secure on family property, shielded from the eyes of strangers. Away from the confines of the town residence, they would pretend to be on a journey through the wilds of China. Children followed by maids with baskets of refreshments would clamber up the mountain paths laughing and shouting, while the women rode on chairs strapped to the backs of servants.

The artificial mountain played a part in one of our family’s domestic dramas. Some five generations after Chang Shiho, my great-grandfather Chang Paizhen went there to escape marital strife. He restored the little cottage at the foot of Infant Mountain. There he lived, cared for by his concubine and a servant, until he died in his seventies, still waiting for reconciliation with his wife.

When he was only thirteen, my father and his younger brother made their final ascent of Infant Mountain on the day before they left for boarding school in Hangzhou. By then the family fortune was gone and it had been decades since gardeners cared for Infant Mountain. The paths and lovely thatched pavilions were in disrepair. Many of the valuable trees had died and the flowering azalea shrubs, so carefully pruned in his great-grandfather’s day, were straggly and bloomed no more. The delightful park of Suzhou gardens had been fenced off years earlier and sold to a merchant who had built himself a mansion within the gardens.

The gardens are now a public park, for Pinghu has grown to encompass outlying areas. Infant Mountain stood for a time, but was taken down when it became dangerous. Paths had eroded and gave way unexpectedly. But the mountain was only ever a work of artifice, intended for the enjoyment of a family no longer tied to Pinghu. The mountain’s significance came from the role it played in family history and that role has faded, along with our once-close connection to Pinghu.

Due to the belief that supernatural beings are attracted to mountains, the Qin Dynasty emperor Xi Huangdi (BCE 221 – 207) built the first man-made mountain in China because he wanted to commune with immortals from the convenience of his own back yard. Thus began the Chinese mania for fantastic man-made landscapes.

Classical Chinese gardens have always tried to encapsulate an idealized version of nature into a small space. There is a tradition of creating small landscapes that feature large rocks and artificial grottoes. These are usually scaled to fit within the garden of a large estate, cleverly designed to separate one garden vista from another, sometimes employing a rocky maze of steps to give an impression of greater distance between different areas of a garden. Sometimes a pile of rocks provided a high point on which to situate a small pavilion; or else a border of trees obscured a wall between the garden and a distant pagoda, thus incorporating an outside scene landmark into the garden’s view.

My six-times-great grandfather Chang Shiho (1698 - 1773) probably wasn’t that all that eccentric when it came to gardening. He just happened to be wealthy enough to build his own artificial mountain. During this same time in England, Capability Brown was revolutionizing English landscaping by emulating idyllic pastoral scenes within private parks.

Like many-times great-grandfather, I also love gardens and working in my (much tinier) back yard. Unlike my ancestor, I can't afford an army of gardeners. Thus our local garden centre does very well each year because I’m spectacularly untalented when it comes to plants and buy replacements every year.