In THREE SOULS, Leiyin's father-in-law is based on my own great-grandfather, the man who married The Wealthy Bride and then squandered her fortune. Enjoy.

I n a previous blog (The Wealthy Bride), you read about my great-grandmother Suefen and how her husband squandered away an enormous dowry meant to support the next three generations. But what did he spend her fortune on? 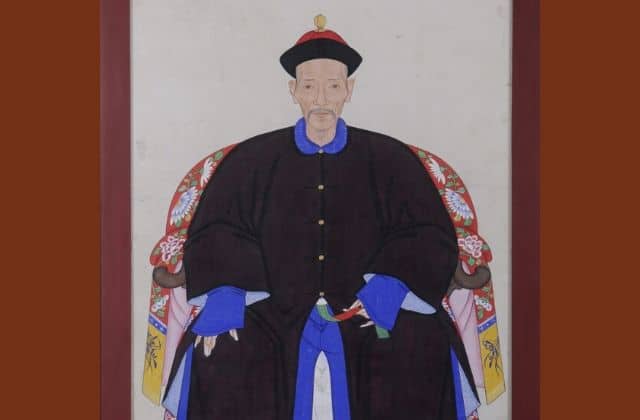 Armed with his wife’s money, my great-grandfather Chang Paizhen finally embarked upon a career. In those final, corrupt years of the Qing dynasty, it was commonly accepted that with the right contacts and suitable gifts, one could purchase a government job. What sums of money were involved are not known, but the family openly admits this was how Chang Paizhen got his start in the civil service.

Although Paizhen was highly intelligent, he’d never studied in a disciplined way, nor formally taken part in the Imperial examinations. Therefore his family was astonished, and then relieved, when he turned out to be an extremely successful administrator. He rose quickly through the ranks and eventually was given the job of looking after Jiujiang fu. A fu is one level above a district, and Jiujiang fu contained a large number of districts, so this was quite a prestigious posting.

There was some debate within the family over the reasons behind Paizhen’s success. Had he inherited his famous grandfather Wenxing’s administrative skills or was his natural aptitude for developing guanxi, connections, the real reason behind his advancement? Whatever the reason, the family was proud of his success and his wife proudest of all, for it had been her fortune that made this possible. It was also her fortune that he spent entertaining colleagues and prominent citizens of his districts, for the modest salary he earned as an administrator did not begin to cover the costs of such lavish hospitality.

But the bulk of his spending was not in aid of his career. Paizhen had exquisite and expensive taste when it came to art and now he began collecting in earnest. After each of his buying trips he would return to Pinghu with crates of paintings, calligraphy, rare books, porcelain, and antiques of all sorts.

Great-grandfather Paizhen’s career came to a halt in 1912 with the end of the Qing dynasty, when all Imperial civil servants vacated their posts to make way for the modern bureaucracy of Nationalist China. He was at loose ends for a while, and often lamented that the new republic had cheated him out of a brilliant career.

Determined to create a legacy, he embarked on projects to ensure that future generations would remember the Chang family’s illustrious past. First he restored the family mausoleum, righting tombstones and memorial steles that had fallen, commissioning new ones to replace those he deemed too humble, and landscaping the entire area. These grand new monuments were expensive, but Paizhen didn’t stop there.

He finished a task his own father, Chang Zuenjie, never managed to complete: he catalogued the literary efforts of our ancestors. His goal was to print a collection of the best works. We were a family of scholars, many of whom were both accomplished and prolific. He read through stacks of manuscripts, scrolls, and books. He curated and edited them into a collection, a task that occupied Chang Paizhen for many years.

When it came time to print the volumes, the task consumed years of skilled labour, for there were artisans needed at every step of the process. First there were the calligraphers who copied text in reverse Chinese characters upon wooden blocks; then there were woodcarvers skilled at cutting out the inscribed text to stand out cleanly from the wood. Then finally there were printers who arranged the blocks in trays and inked them for the press, then peeled off sheet after sheet of printed mulberry paper. The artisans were housed and fed in the Chang residence for the duration of the project, some of them for as long as a year. Chang Paizhen printed hundreds of copies to distribute to various branches of the family. Then he had fifty copies printed in expensive vermilion ink as special gifts.

Great-grandfather dedicated enormous resources to edit and print our ancestors' writing, brought financial ruin to our family as a direct consequence of this effort, and alas we have nothing to show for it. There’s not a single copy to be found anywhere. The pages were probably used to start cooking fires or shredded up during the Cultural Revolution when such bourgeois conceits could bring ruin to a family.

Silenced by tradition, no one voiced their concerns to Paizhen; as patriarch he held absolute authority in the family. If Suefen had spoken to him in private, he might’ve curbed his excesses. But because of her conservative upbringing, Suefen never felt she deserved any say in how her husband spent her fortune. Suefen was the only one who could have staunched the outflow of money, but by the time she understood this, it was too late.

Luckily for the Changs, it would be another decade before they descended into dire need, for another infusion of cash arrived when Suefen’s father died, leaving her another sum of money. This time the inheritance was solely hers to use, and she spent it on taking care of the household. Each week she handed my grandmother, her frugal daughter-in-law, sixty silver coins, fifty for household expenses, the rest to distribute as pocket money for herself and the children.

Suefen was painfully aware of her husband’s spendthrift ways but she was still reluctant to criticize him. Instead she attempted to augment the family income by investing part of her inheritance. She bought several houses in Pinghu to rent out and lent money to farmers. She even invested in a light bulb factory.

She met with little success however, for this was not something she had been brought up to understand. The light bulb factory went out of business, and the tenants of her houses did not always pay on time, or absconded without paying at all. Crops failed and farmers defaulted.

When he finally understood the state of his family’s finances, Paizhen found work in the banking industry. His modest earnings, however, could never make up for the vast sums he had wasted.

Strange though it may seem, my great-grandfather’s lack of control when it came to money did not harm his relationship with his wife as much as their falling out over his concubine. It was a situation that created rifts in the Chang household, for all took sides in the dispute. The quarrel hurt nothing but Suefen’s pride but much of it was her own doing. It was she who had told him to take a concubine. Had she wanted to berate her husband, she could have done more for the family by criticizing his extravagance, for Paizhen caused the entire family far greater harm with his spendthrift ways than with his concubine.

After Paizhen’s death, the family was finally able to openly voice their bitterness at Paizhen’s extravagance. He is remembered by our family mainly for squandering three generations worth of wealth in one.

My father told me once that his grandmother Suefen considered herself fortunate because her husband did not indulge in gambling, wine, women, or opium. Great-grandfather Chang Paizhen may have squandered his wife’s dowry, but at least he spent it with discernment. His greatest extravagances were motivated by filial piety: restoring family graves and publishing his forefathers' writings.

There is another small story to share. Great-grandfather once managed to get my grandfather a job interview with a bank manager in Shanghai. When Grandfather went to this interview, Great-gramdfather made him take one of the last vermillion-printed copies of the Chang ancestor writings to give as a gift to the bank manager. My grandfather returned without the job. My grandmother said very gently to her father-in-law that few people these days could appreciate fine writing. What she meant was this: that we should have bribed the bank manager with money, not essays and poetry.

When my father told me this little story about the failed banking job, I felt touched by Great-grandfather’s esteem for our ancestors' writing. Unlike that bank manager, he would have received another family’s collection of ancestral writings with great reverence.