N ormally I would write a book review followed by an author interview. But I would not know where to begin reviewing Escape to Gold Mountain, David Wong's amazing graphic novel about the immigrant experience as seen through the eyes of multiple generations of a Chinese family.

It is powerful, often brutal, and brings together a family saga interwoven with the politics of racism.  It speaks to the broader injustices of earlier immigration laws and gives context to some of our  current issues .

I was a teenager when my parents came to Canada. At school I never learned anything about Chinese immigration – apart from vague references to Chinese labourers coming over to build the railways.

Escape to Gold Mountain has been tremendously helpful to my understanding of Chinese immigrant history; not just because of chronology but for the context it brings to the legislation that lured Chinese peasants here and then left them high and dry. 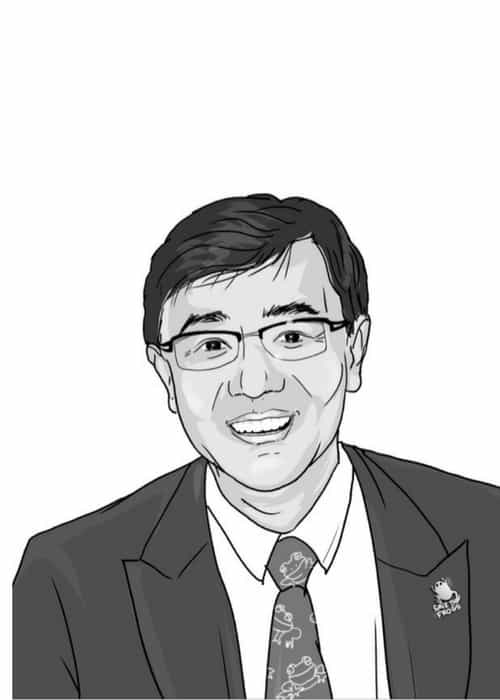 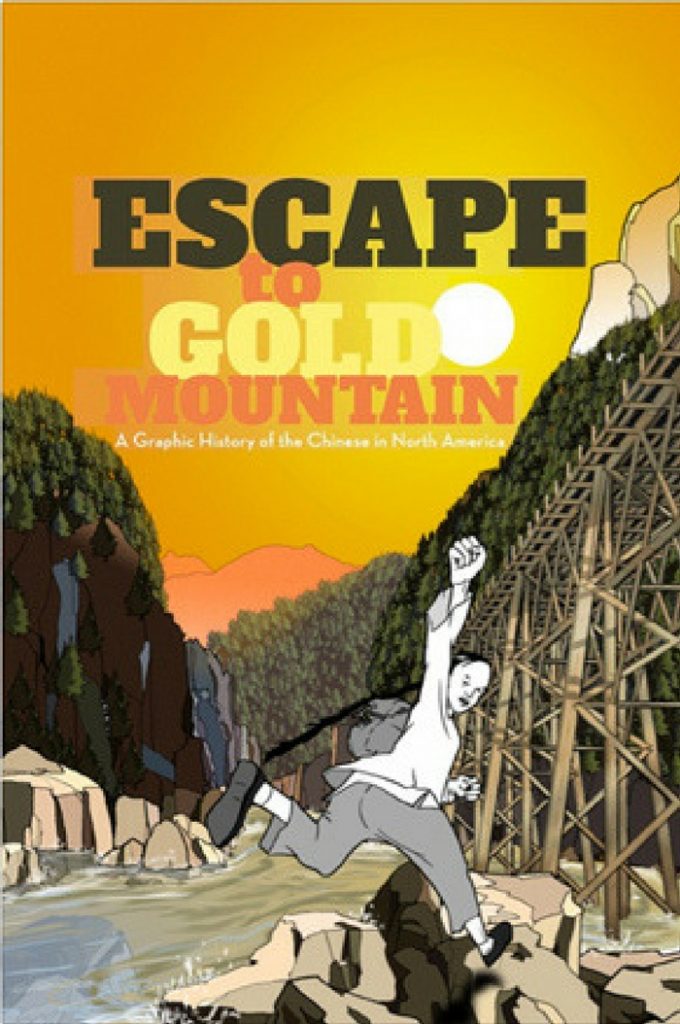 I hope Escape to Gold Mountain becomes part of every school curriculum. It’s a huge achievement and a ground-breaking work of immigrant history. I am very honoured to feature David on this blog.

JC: Welcome David! What’s keeping you busy these days? I get the feeling your schedule is pretty full of speaking engagements

DW: Other than a flooded basement (!) I just re-activated my architectural firm. Though I undertook the odd small project here and there, I had placed my architectural firm in "hold" mode while I worked on my book. The name of my new firm is inspired after the Chinese name given to me at birth, "Hai Tian" which means, "Sea to Sky". So my new firm is called David Wong Architect | Sea to Sky Architecture.  I love architecture, and I love projects that embrace good environmental design (I'm a biologist by training). So, after a few years working on my graphic novel, I am really looking forward to interesting design work!

JC: You mentioned in the talk you gave at your book launch that you had to edit down your original draft quite a bit. How did you decide which events to leave in? Did you arm-wrestle much with your editor?

DW:  Approximately 100 pages were removed from the original draft. I had a wonderful editor, Susan Safyan. Susan and my publisher, Arsenal Pulp Press, explained to me that it was important to keep the story tight and "flowing". Because I had so much history to draw upon, I had created a number of stories that were interesting, but didn't support the basic story line -- that of the life of a family through 6 generations.

So the difficult part was to cut out material that had a weak connection to the "family through time". It was a bummer, because one of my favourite writers is Samuel Clemens, better known as Mark Twain. I had a story of how my main character, Ah Gin, met Mark Twain at a frog race and became the best of friends. I love frogs, and I thought it would be fun to introduce the importance of frogs into the book, and the fact that Mark Twain was a vocal advocate against the racist laws that were being introduced by the American government at the time. The Mark Twain/Ah Gin friendship story was cut near the end of the editing process. I had managed to keep it from being cut during the earlier drafts, but couldn't keep this chapter at the final draft.

Also cut were introductions to a whole cast of other notable historic characters, including Amore DeCosmos (BC's colourful premier), Dr Sun Yat-sen and the invention of chow mein, and other interesting stuff.

So yes, I did quite a bit of arm wrestling with my editor and publisher.  So towards the middle and latter parts of the book, the story timeline sort of speeds up, as the chapters that were once there, had been removed.

JC: Your novel contains incidents drawn from fascinating stories of interactions between earlier generations of Chinese immigrants and First Nations people. Can you expand more on this, especially what you found during your research?

DW: One of the more important goals of my book is to share and remind people of the long and respectful relationship the early Chinese had with our First Nations peoples. In today's context, I find it heart breaking to see a sometimes adversarial relationship between Vancouver's Chinatown and their neighbours in the Downtown Eastside. I attribute a lot of this animosity due to poor leadership and blatantly unqualified staff at city hall.

Growing up on the west coast, I was and am often reminded of the many interesting and valued relations between the two communities. For example, my dear friend, Chief Len George of the Tsleil-waututh, informed me that rice is a staple in the diets of many native bands along the Fraser canyon. Len attributed this to the early Chinese rail workers who introduced rice to the peoples along the river.  I video-taped Len sharing this story and other interesting historic anecdotes and I'll post it on my website later.

One of the most incredible experiences that occurred during my research was during my visit to the Xaxli'p (also known as the Fountain Indian Band), near Lillooet, BC.  I was there with a number of people, led by community activist, Bill Chu, to visit an old Chinese pioneers gravesite.  As we were there paying our respects, we noted how the graves were carefully fenced in, and respectfully cared for by the Xaxli'p.  I remember it vividly still. It was a late September evening, with the sun setting on the horizon, with very strong gusts of wind sweeping the grassy stretch along the highway.

As we were making our way back to the highway, this pick up truck stops along the side of the road, and a local native woman popped her head out of the vehicle and asked us what we were up to.  We explained to her that we were just tracing the path of our ancestors, when she asked us to wait 15 minutes while she drove back to her home to give us something. Sure enough, she returned with two amazing gifts. Gifts of delicious air dried salmon! She wanted to thank us for our interest and for our respect for the ancestors of this land, ancestors whom she was proud to inform were also in her blood and in her community, due to the early mixed marriages between aboriginal peoples and the Chinese.

I wonder if Vancouver's urban Chinese community would go out of its way to tend a First Nations gravesite, and welcome strangers with gifts.

JC: Your graphic novel is not an easy read, in the sense that coming face-to-face with racism is always an ugly experience. I’m curious to know what kind of feedback you’ve gotten from young folks – white kids, 3rd or 4th generation Chinese-Canadians, and also new Canadians of various origins?

DW: My book has only been out for about 2 months, and so far much of the feedback have been from friends or from the families of friends. I'm delighted to learn that they all say that it is wonderful that "the history of a group of people is presented in this picture book format". I hope they're not just saying it out of niceness :-).

The real neat thing is that a number of them, after having read the book, have decided to buy more copies (I'm sure that keeps my publisher happy!)  I just completed a very busy and well-attended book tour throughout the American West Coast. It was so nice to see faces from across the cultural spectrum! I am now receiving lots of supportive emails from readers,  mostly from people of my generation. I haven't heard much from the younger generation (my children's age group), but I'm happy to see photographs  (sent to me) of young people reading my book, photos posted by parents on to my Facebook page. I especially appreciate the nice comments written by the people who submit the photos -- many saying that their kids have read and re-read the book, and can't put it down!

This weekend will be an interesting one, as I will be part of a conference on diversity and the immigrant experience in Richmond, BC. I understand that much of the audience will be new Canadians. This will be wonderful as I love to share our nation-building story with all of them, and for them to learn of how far this one community, the Chinese, have come and how our history has helped shape Canada to what it is today, as a pleasant and diverse place.

JC: You’ve said this graphic novel was a LOT of work – what advice do you wish someone had given you when you first started working on

DW: Yes. Most of the tough work was due to my ignorance of the whole industry! I didn't know how to find a publisher, how to pitch a story to prospective publishers, and how to work with editors.  I'd like to think I'm wiser having gone through the ropes!

For example, I had to verify a lot of facts regarding dates, place names and events. These were the easy things to verify. What I didn't realize was that when I drew up the characters and scenes, these too, had to be period accurate! So I spent over a year researching clothing attire, hats, cameras, automobiles, streets, building designs, ship designs, furniture, WW2 uniforms, signage (typeface), language (what were the swear words in 1880?).

What did males and females in China, America and other places wear? For example, a Qing dynasty official had their ranking identified by the animal crests on their uniform (birds for administrators, fierce mammals such as tigers and lions for military). The ties, hats, eyeglasses etc. all drove me crazy! But that's not the end of this "research" story.

After I collected gigabytes of facts and info, I had to sift through all this material to see which items to use or reference. But worst of all, I never kept track of the source materials. I had re-used the post-it notes I had flagged in the many reference books, or just never bothered to record the source of the original info!  I won't share the foul words I blurted out when I realized I had to prepare an info and reference section -- basically had to start all over to source the info!

Lesson learned. One must organize all draft material and organize all reference info! I wish someone had told me this at the very beginning!

The one thing I am most happy with is the fact that I worked with a publisher and an editor who kept me on schedule. They know how the industry works (and doesn't work) and helped me understand how the printing process works. For example, large printed sheets that are cut up, so the page count has to be in multiples of 16 or 24. Thus I had to be vigilant about double page spreads and chapters that started on the wrong side (left vs right), and to fit the final page count into the printing standard of 16/ 24 page (i.e. not one extra page more, else it would be 1 printed page plus 15 blank pages!).