Our Most Filial Ancestor

Book of the Month Club!

This story about an ancestor who took Confucian values very seriously has not yet made it into a novel.

OUR MOST FILIAL ANCESTOR

W hat Chinese family’s history would be complete without a tale of extreme virtue? In the Chang family, it was my nine-times-great-grandfather Chang Yaopu, more than three hundred years ago, who set the ultimate standard of filial piety for his descendants.

In a Confucian society, the greatest virtue was devotion to one’s parents. For thousands of years, emperors died and dynasties were overthrown, invaders conquered our territories and were absorbed into the beguiling civilization that was China, but through it all, Chinese society was held together by the cult of family. Only in this century has the Confucian ethic weakened, as overwhelming regard for our elders gave way to Western notions of individual freedom. 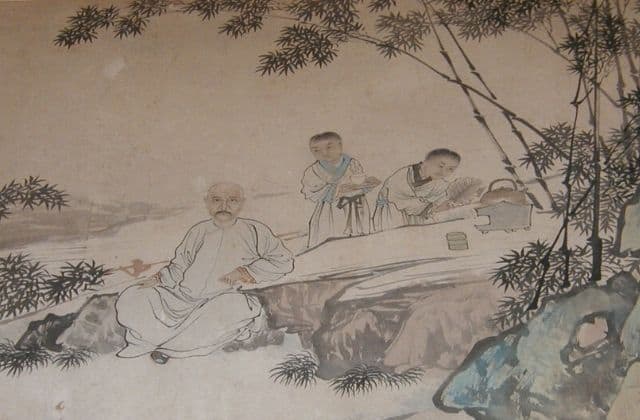 The primary school textbooks my parents bought for me did not follow the adventures of Dick and Jane. They contained simplified versions of tales from The Twenty-Four Exemplars of Filial Devotion, stories compiled by Guō Jūjìng of the Yuán dynasty (1260-1368). These sometimes-lurid tales included that of eight year-old Wu Men, who sat shirtless and motionless on hot summer nights, luring mosquitoes to feed on him so that the insects would not disturb his parents.

Then there was Lady Tang, who let her own child starve during a time of famine by giving her breast to suckle her elderly mother instead.

And during another one of China’s innumerable times of famine, a poor farmer named Guo Ju decided to kill his only son so that the boy’s share of food could go to Guo’s mother. Putting off the dreaded act for as long as possible, Guo first dug a grave for his boy. Heaven took pity on him and his shovel struck a hoard of gold coins. With money to buy food, he didn’t have to sacrifice his son after all.

Our many-times great-grandfather Chang Yaopu was also known in the family as Xiao Zhi Kung, the Filial Ancestor, for his act of parental devotion came straight out of the classics. Chang Yaopu was a scholar of the juren ranking and at the time of this story, he held a position in the provincial capital of Hangzhou, a city that lay a great many days travel from our hometown of Pinghu. His parents fell seriously ill during a typhoid epidemic and the family sent a letter asking him to return, for his parents wished to see him before they died.

Chang Yaopu immediately hurried back from Hangzhou. He took along only a few servants for he needed to travel quickly. It was foolhardy to travel so lightly attended, for this was during a period of great lawlessness, and the roads were rife with bandits, but his parents were his first concern. It took him only two days of unrelenting travel to arrive home, where he found his parents close to death.

In those days, the treatment of last resort was a medicinal broth made from human flesh, the flesh of the patient’s own child. This remedy was considered the strongest restorative available. Who knows why the broth was believed effective. Perhaps the physical properties of one’s own child would bring back the patient’s own youthful vitality, or perhaps simply the knowledge of this filial sacrifice would bring such joy that it stimulated the patient’s will to live. Maybe it was a last desperate ploy to get the attention of Heaven, so that the gods would be moved to tears by the devotion of such a child and bring the parent back to health.

What we do know is that Chang Yaopu took out a long steel blade and sliced off a portion of flesh from his inner thigh. He placed it to simmer in a pot of clear spring water, and then with his own hands he fed the broth to his dying parents.

Family history does not go on to say whether his parents survived, but that is not the point. This one incident ranks so prominently that it completely overshadows any other worthy deeds Chang Yaopu might have achieved, obliterating the need to mention anything more about him. We know nothing else of his life.

There have been other members of the family who performed acts of filial veneration, but none who came close to Chang Yaopu, who sacrificed a piece of his own body in order to save his parents.

We have for example, the life of my great-great-grandfather Chang Zuenjie, who could’ve had a successful career in the Imperial civil service. But his parents couldn’t bear for him to live so far away and so he turned down the position offered to him. He obeyed his parent’s wishes and stayed at home, diverting his considerable talents to editing and printing the literary works of various citizens of Pinghu, especially those written by our ancestors. He was extremely interested in local history and feared these works would be lost if he didn’t publish them. Not only did the project require years of his time, but also the labour of many artisans. It was an extremely expensive endeavor, and severely depleted the family’s wealth.

It wasn’t until his son, my great-grandfather Chang Paizhen, that the family fortunes were restored, at least for a time. Paizhen’s bride was the daughter of a great Hunan family with a dowry of tens of thousands of silver taels, worth more than all the Chang family landholdings. (see The Wealthy Bride)

Paizhen set about refurbishing the Chang family graves and had magnificent monuments made to honor our ancestors.  In the footsteps of his father Zuenjie, he also embarked on a publishing project, a collection of literary works by various ancestors. This turned out to be a multi-year effort, and during this time, the Changs housed and fed a troupe of calligraphers, wood-block carvers, and printers. Thus by honoring our ancestors Chang Paizhen nearly bankrupt the family. (See The Spendthrift Husband)

By the time my father was born, the only acts of filial devotion the family could afford were those of care and attention, of giving preferential treatment to the elders of the family and obeying their wishes as much as possible.

On my first visit to China, my father brought me and all my Chang cousins from Shanghai to visit Pinghu, to see the house where our family once lived. He pointed to a dirty second-floor window that faced down on to the courtyard.

“That was my grandmother’s room,” he said. “In the afternoons, we children were not allowed to play in this courtyard, in case we made too much noise and disturbed her nap.”

There was a fond smile on his face and we could tell that he was seeing the house as it had been in his childhood, that his eyes barely noticed the crumbling brickwork or the warped window frames.

Until the day she died, his grandmother was pandered to and cared for to the best of the family’s ability, even during the years of war. Although the family was poor, there were many who were even more impoverished. Thus there was always a servant to accompany her, to steady her walking, fetch and carry for her, bathe her, and empty her chamber pot. In large households, family members and servants could take turns with the elderly.

My father often expressed regret at not being able to care for his parents in their old age, for his mother had died very young, and by the time China opened up to allow visits from overseas Chinese, his father was long gone. The best he could do was to buy a family plot and dedicate tombstones to the memory of his parents and grandparents, for by this time the original Chang family mausoleums had been razed to make room for new housing.