The Origins of Nightmares

A Tale of Lost Heirlooms

Book of the Month Club!

This story's setting forms the basis for The Library of Legends. In my novel, I tried my best to imagine the world as my father and his classmates saw it, their long walk to safety amidst the turmoil of war, the daily hardships, but also the camaraderie and optimism of youth.

THE ORIGINS OF NIGHTMARES

A ll his adult life my father suffered frequently from terrible nightmares. When this happened, we would cringe in our beds waiting for the dreams and his shouts to subside. He would wake up the household with his cries and sometimes even wake himself falling out of bed. I finally found the courage one day to ask what happened in his dreams to frighten him so. 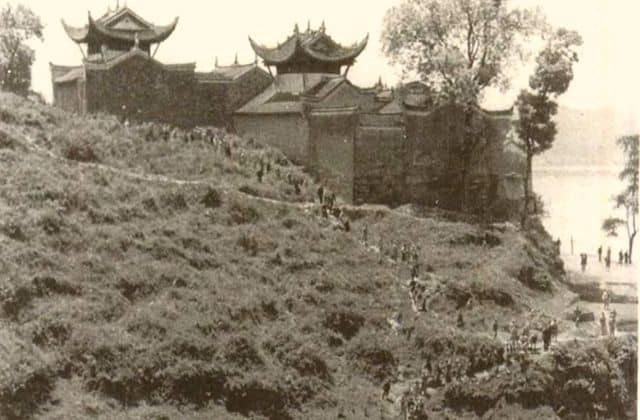 My father was only a teenager of fourteen when he and his younger brother were sent to boarding school in Hangzhou. After high school, he went on to university at Nanjing, where his time at university coincided with the Japanese invasion of China in 1937. Students who were able to return home did so, but by then many could not even contact their families. Father felt he had to get through his schooling no matter what, for education was his sworn duty to the family. And so he chose to stay with his university.

The school decided that all staff and students had to flee Nanjing to stay ahead of the battling armies. Professors, students, servants and school administrators all took to the road, walking beside donkey-carts piled high with kitchenware and library books. This caravan of a campus was not unique, for this was the government’s mandate,  a way to preserve China’s universities and middle schools, an entire generation of educated young adults.

Thurs many schools carried on in a nomadic fashion, stopping wherever it seemed they would be safe for a few days, and if they could stay longer, continuing with their classes. In this way my father lived for the next year as part of a traveling campus.

Somehow through all this hardship, my father said, he and his classmates seldom felt as though they were truly in danger. He admitted they knew little of the real world at that age. Since the whole campus had turned refugee, it never occurred to them that they were attending school under extraordinary circumstances. Even their constant hunger and tiredness seemed normal.

With the self-centered optimism of youth, they believed everyone lived as they did, that this was how people managed during times of war. Likewise, they recognized only vaguely the enormous responsibility the staff of the school had taken on in continuing to instruct and care for the students. They simply thought that with someone in charge of them, they would not come to any harm so long as they obeyed their professors.

My father commented that when he thought back to those days on the road, to say that they ‘fled’ anywhere was rather an exaggeration since most people had no means of transportation apart from their own two legs. Only the most elderly of their group were allowed to ride on the donkey-carts. All told, they probably covered no more than eight miles a day, a ridiculously futile distance between them and an invading army.

There were Buddhist and Daoist temples all over the countryside and in every village and the refugee campus would stop in these places for a few nights. These were the most suitable accommodations since temple halls could be used as makeshift classrooms as well as dormitories. After a long day of walking, the tired students would sling off their heavy canvas rucksacks, unroll straw mats and blankets onto cold stone floors, and settle down to rest.

My father dreaded sleeping in the Daoist temples, which always featured statues of giant demon deities, painted in bright colours, with protruding eyes and enormous fangs. Sometimes when he woke in the early hours of the morning, my father would open his eyes to see a red-painted guardian from the gates of hell glaring down at him. So sometimes his nightmares were of being hunted down by horrible demons intent on dragging him down into the underworld.

Some students were able to receive money from their families, but had they even known how to reach my father, his family was too poor to send him anything. Students from wealthier families were able to buy extra food and fuel along the way but Father had to subsist on the scanty rations of rice and vegetables handed out by the school. Sometimes he didn’t have any fuel, so he waited until others had finished cooking, then he’d sift through the ashes and gather up remnants of hot coals to heat his meal.

My father said that in those days, students talked a lot about patriotism and politics because it was expected to behave as though you had political leanings of one sort or another. But in actual fact, most of them lacked real understanding of the issues. My father and his classmates knew some slogans and the names of a few prominent members of the Nationalist and Communist parties but had no real idea at all of what was going on. They were idealistic and ignorant all at the same time.

Both political parties in China were recruiting heavily amongst student ranks even as they fought the Japanese and each other. Whenever anyone approached my father, he would apologize and say that he had promised his parents he’d concentrate on studying and not get involved in politics.

Thus my father earned a reputation for being too poor to contribute financially and too dull to be politically useful. As a result, he was ignored by both sides.

My father said however, that this poverty and apparent naiveté saved his life. From time to time, students would vanish. There would be rumors that they’d slipped away to enlist or had been arrested for their Communist sympathies or even murdered. He recalled in particular a popular student named Wang, a young man who was openly Communist, extremely charismatic and much admired. He clearly remembered the day Wang was reported missing. Later that afternoon, Wang's body was pulled out of the lake with a bullet through his temple. And so sometimes my father would have nightmares in which he had been captured by Communist spies (in his dreams it was always the Communists) and was about to be murdered.

During the early months of 1938, the country began hearing news about one of the most horrible events of the war, the Nanjing Massacre. This news eventually caught up with the students, who had been fleeing inland. From newspapers and from refugees on the road, they learned of the killings and unbelievably cruel tortures that had been carried out in Nanjing by the Japanese army. And so while he was not a witness to the atrocities of the Nanjing Massacre, my father didn’t manage to avoid being affected altogether, because some of his nightmares originated from the horribly graphic accounts he heard from those who had seen and survived the city's occupation.

After the war ended, my parents married and moved to Taipei, where they lived in a shabby old house. They believed themselves too poor to be worth robbing, but there were people even more impoverished and desperate after the war and their house was burgled several times in the first year. These nighttime disturbances transformed into nightmares that caused my father to shout warnings in his sleep, as though to rouse a large household out of bed to scare off the burglars.

My father lived through times of great fear and insecurity, enduring adversities we cannot even imagine. During the chaos of the wars, he was too young to understand that simply to be alive was difficult and dangerous. Like the survivor of a near-fatal accident who didn’t think to be frightened at the time, he would scrutinize his memories later and understand how precariously close he’d come to harm or even death. That realization terrified him more than the actual events ever did.

After surviving such uncertain times, my father was cautious in his life decisions. He was led to new ventures by friends, prodded to career changes by my mother, forced to emigrate by circumstance.  I used to think that just as he felt ready to take on a new challenge, he would be pulled back down by his nightmares and wake up resistant once more to taking risks.

But now I believe that since he had lived through so much hardship in his youth, he felt his adult life was already more secure and luxurious than he’d ever thought possible and that to want for more was excessive. Perhaps that was why he felt it unnecessary to make changes in his life.

Through no fault of their own, a generation of young Chinese watched their country commandeered by foreign powers, invaded by a neighboring country, and torn apart by civil war. They somehow managed to survive, marry, plan for their future, and raise children. They still laughed and made friends.

Which brings me to something covered in previous blogs – our family genealogy. What possible use could anyone have these days for a recorded genealogy of 36 generations, except to say it exists? That’s what I used to think.

Now as I post this blog during the time of Covid-19, I picture a long line of my ancestors, stretching back in a chain of 900 years. 900 years of names and lives, 900 years that undoubtedly encompassed tragedies such as war, poverty, disease, and famine. Whatever first-world problems have clouded my life, my ancestors probably wouldn’t have even considered them problems. They survived far worse to carry on for another generation and then another. And now, here we are, attached to the end of that chain, ready to add more links.

So now I think: my parents and ancestors lived through far worse, and so can I.