I t’s 1952 and New Jersey housewife Daisy Lawrence waits at Mitchell Air Force Base for the plane that brings 18-year-old Keiko Kitigawa from Japan. Daisy is hosting Keiko, who is no ordinary home stay guest but a Hiroshima Maiden – a survivor of the bomb, the recipient of free American plastic surgery to remove her scars, and a poster child for the anti-bomb movement that funded her trip. Once Keiko’s disfigurement has been repaired, the sponsors of The Hiroshima Project will take her on tour to give testimony of the bomb’s devastation.

Shaena Lambert has chosen a complex and unnerving period in American history for RADIANCE. Immediately following the Second World War, the United States is the most powerful nation in the world, with the most powerful weapon in the world. But the McCarthy Hearings make Americans doubt their country’s internal stability. Keiko’s arrival, only seven years after the end of the war, adds enough disruption to stir emotions to the surface in Daisy’s small world. Her neighbor, once a POW, resents Keiko’s presence. The Resident’s Committee wants to meet about the home stay situation, which Daisy did not discuss with them beforehand. 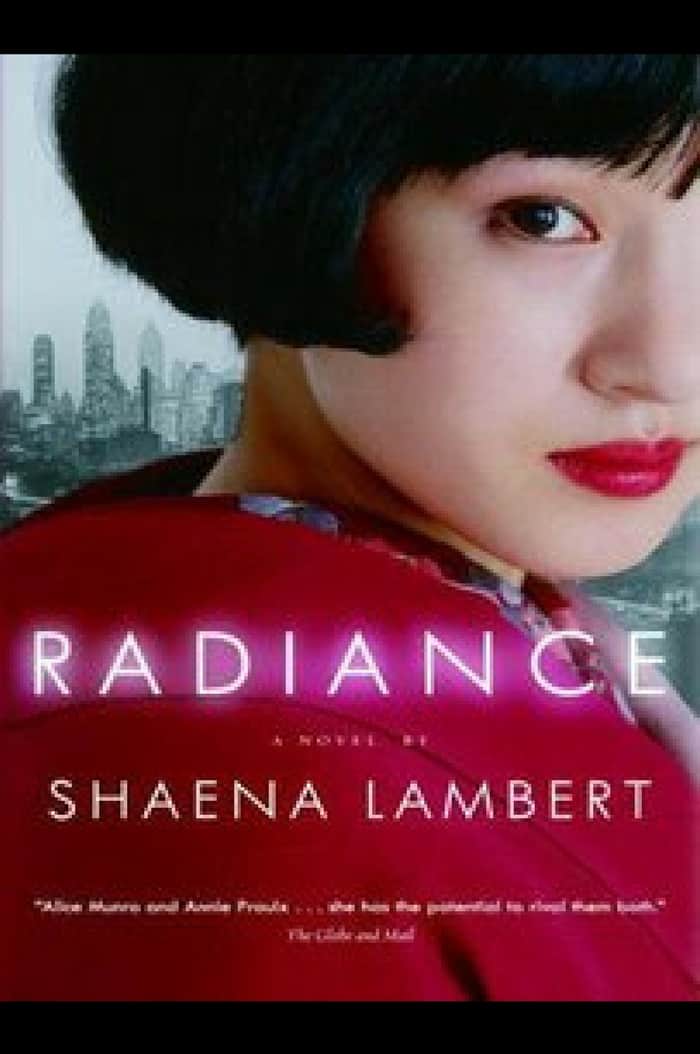 And then there is the Hiroshima Maiden herself, scarred yet beautiful, a vulnerable and passive canvas who engages the imaginations of the Americans around her.

A young photographer sees his dead sister in Keiko and courts her. Daisy’s husband Walter finds himself telling Keiko things he’s never told Daisy. Irene, a social-climbing journalist who has attached herself to the Hiroshima Project, believes that Keiko is a cynic who understands perfectly the implications of speaking out against the bomb in exchange for surgery.

Daisy is not so sure. Keiko is formal and distant, but Daisy’s generous maternal instincts sense fear in the young woman, a reluctance to recite – and relive – memories of devastation and the deaths of her family. Daisy’s conviction that Keiko needs to back out of the publicity tour propels her from being an amiable and inoffensive homemaker to a determined, if ineffective, advocate for Keiko.

Keiko could so easily have been a grateful, cooperative character, but then Lambert’s tale would have been far too transparent. Who is being manipulated? What lies do we tell so that we can face ourselves? The Hiroshima Maiden reveals to us the people around her; she becomes a focal point for their guilt, righteousness, self-delusion and awkward truths. But we catch only glimpses of Keiko’s true feelings, layered between her own guilt, nightmares, and memories of the unspoiled Hiroshima of her childhood.

I believed that for a metaphor to be effective, it had to run through the fabric of the novel, invisible but omnipresent. In my novel THREE SOULS, I had wanted to use a river as metaphor for memory, but ended up ripping it out. It was just too unsustainable trying to inject watery images everywhere.

[And OK, I just really, really wanted the chance to use “riparian” somewhere]

For me, the most revealing passages in the book  were Keiko's recollections of childhood, especially her time with her grandfather who told ghost stories about bakemono, fox spirits. Maybe it’s because I’m Chinese, but I could not help gravitating to this metaphor of a shape-shifting creature, subject of countless folk tales.

In Asian ghost stories, the fox spirit usually takes on the form of a beautiful woman who tricks her way into marriage with a human husband; sometimes she even gives him children. Then one day, after years of apparent bliss, the fox spirit is unmasked, usually by an outsider. The consequences of the man’s relationship with the fox spirit depend on whether the spirit is evil or helpful – yet there is always a wistful sort of ambiguity about the fox spirit, even if it turns out to be evil. After all, she spent all those years playing the part of a devoted wife.

The challenge with the fox spirits metaphor is that it needs to cross cultures, to conjure up a world of meaning for non-Asians. But instead of bringing it up and offering context at every turn, I see now that setting up a metaphor can be entirely separate from how it is evoked.

Lambert confines mention of bakemono to the Hiroshima of Keiko’s memories: the shrine near their home guarded by twin fox statues, her grandfather's stories about fox spirits, how he could name all the species of foxes. Whether or not you are acquainted with Asian ghost stories, you understand these stories reside deeply within Keiko's being.

Thus when Keiko tells Daisy that her mother used to call her ‘little fox child’, she is signalling her unreliable nature to Daisy in the most obvious way possible for a Japanese, yet without revealing herself. And when the fox spirit manifests in America, it is only as a sound, the swish of an animal tail in her hospital room when Keiko hallucinates about her mother. It is a momentary delusion, but after this the fox spirit comes to mind, can’t help but come to mind in all its ambiguity, its true purpose hidden from humans as we realize that Keiko is remaking herself, transforming into the Hiroshima Maiden her sponsors want her to be.

Metaphor is so contextual and often specific to culture. If I had chosen to use fox spirits, it’s very likely I would been ineffective; I would have used fewer words while setting up that metaphor – simply because it’s so recognizable to me that it would feel heavy-handed to do more -- and clumsily tried to pull it more frequently into the narrative.

RADIANCE reinforces an important lesson: that when you are writing for a multi-cultural audience, you need to create references that are accessible, and at the same time, trust in your readers' intelligence to make the connection. In her novel, Lambert does this by ensuring we understand the personal significance bakemono carries for Keiko, even if we don’t grasp fully the nature of fox spirits.  Then, delicately and deliberately, with just the flick of a ghostly tail, she sets the metaphor in motion.