This is the story of the orphan boy named Chen who my grandfather adopted informally. So far, he hasn't surfaced in any of my novels.

I have mentioned before that there was no single event in my grandfather Mao Ba’s life that makes for a good story and in a way this is true. The story of the cigarette boy is really just another example of how Grandfather conducted his life, his kindness and charity to people outside his own family.

As for the cigarette boy Chen, we don’t know much about his life before he came to our home in Pinghu. My mother and uncles were told it was rude to ask questions about his unfortunate past, and so they refrained from doing so. Everything they know about him began from the time he was rescued by one of Grandfather’s friends. 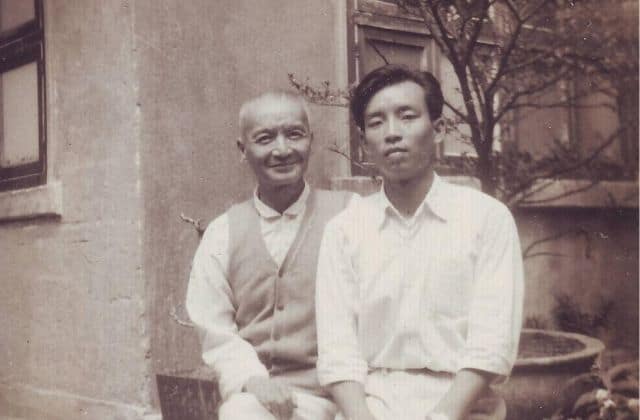 My grandfather Mao with his youngest son. We don't have any photos of the orphan Chen

This friend lived in a town downriver from to Pinghu. He was sitting by the open window of a teahouse one day when he noticed a young boy hanging about near shop entrances, trying to interest customers in his small supply of candy and cigarettes. His goods were displayed on a wooden tray attached to a canvas strap that hung around his neck, and these cheap items were just enough to keep him from being classified as a beggar. Grandfather’s friend called the boy over, and found out that he was named Chen, and orphaned. He was perhaps eight years old and nearly starving, but stoically refrained from eating the candies for he was intelligent enough to understand that the sweet taste would not fill his stomach. Recalling that his friend Dr. Mao needed a janitor for his clinic, the friend took charge of Chen and marched him down to the docks. Together they boarded a boat to Pinghu and the friend delivered Chen to the Mao Ba Clinic.

Young Chen started each morning sweeping the courtyards and scrubbing the clinic’s floors. Then he would attend the local primary school with my mother and her siblings, for Grandfather believed that education was the most important gift a child could receive. After school and on weekends, he would carry out his janitorial duties.

My grandfather’s clinic also housed medical students fulfilling their internships by assisting him. Grandfather soon entrusted Chen with the care of surgical instruments. Chen made sure they were all cleaned and properly stored. He sterilized them before each surgery with great care, following Grandfather’s instructions to the last detail, so that after some time he became an assistant to the assistants.

By then the boy was also accompanying Grandfather on house calls. Grandfather’s routine was to see patients at his clinic in the morning, then go on house calls in the afternoon. Sometimes he brought Chen, who handed him his instruments or ran back to the clinic for supplies. Chen would skip along beside Grandfather’s sedan chair as it weaved through the stone-paved streets, and as the little entourage approached each patient’s home, he would join the sedan chair bearers in calling out loudly “Doctor Mao is here, Doctor Mao is here!”

My mother, who was only two years younger than Chen, has said that he was not very tall, and not very handsome, but very serious. His early years of poverty had not embittered him, only made him more ambitious. Chen’s utter devotion to my grandfather inspired in him a desire to become a doctor. At first he didn’t dare to confess to this for it seemed too lofty a vocation and too presumptuous a desire. Instead he did his best to help Grandfather during surgeries, listening and watching avidly along with the medical students. He had seen so much disease and cruelty during his time on the streets that the sight of open flesh and blood didn’t repulse him; he was merely fascinated by the method and knowledge being applied to the problem.

My grandfather had told all his children that he didn’t want them to take up medicine, for it was a hard life. His working hours were long because he didn’t have the heart to turn away patients, no matter the time of day or night, the nature of the emergency, or the state of his own health. Since Chen accompanied Grandfather on house calls, he often witnessed for himself times when the doctor was more tired and ill than the patient, and the boy would boil with indignation at the way the people of Pinghu took his benefactor for granted.

None of my uncles showed any inclination towards medicine. Chen made up his mind to become a doctor, and to pay back his debt to Grandfather by helping him in his practice and taking away some of the burden.

When he finally spoke up, Grandfather was delighted, for he felt that Chen showed an aptitude for medicine. But Chen’s education was a problem, because although he could read and write, he lacked the basics when it came to the sciences. So Grandfather met with the local school teachers and they agreed to take the boy into their classes for specific subjects. Grandfather even tutored him in the evenings to make sure that he could keep up. Thus, Chen’s status officially changed, and he became one of Grandfather’s students. He had long since been given his own room and no longer slept inside the doorway of the front hall, but now he was no longer asked to do household chores.

When the Second Sino-Japanese War began, our family fled Shanghai as refugees and Chen went as part of the household. He was still only a teenager, but while in Shanghai he became Grandfather’s full-time assistant in the little medical office that was both clinic and home to the household. He ran errands, mixed drugs and helped with what small surgeries could be performed inside those cramped and limited facilities.

After a few years of working alongside my grandfather, Chen was as knowledgeable about illnesses and treatments as any doctor. But he lacked the qualifications to enter university. So Grandfather embarked upon the only underhanded transaction of his entire life: he persuaded a friend in the Ministry of Education to forge a high school diploma for Chen.

From then on the former cigarette boy Chen Jiguan was known by the name on his diploma, Chen Tong. Armed with this piece of paper, Chen wrote his entrance exams and was accepted into the German Medical College in Shanghai, where Grandfather paid for his tuition. Chen, determined to be as light a burden as possible, made the rest of his way through his degree on scholarships.

He graduated with distinction from German Medical College in 1949, the year that the Chinese refer to as “liberation”, when the Communist Party took control of China and the Nationalists fled to Taiwan. His first position was at Shanghai First Medical Hospital, where he eventually became head of the cardiovascular department.

After the war, Grandfather returned to his clinic in Pinghu. When he retired, he and my grandmother moved to Shanghai to live with their eldest son. Chen visited our grandparents frequently, for he considered it his filial duty. Chen gave all the credit for his success to the man who had taken him in when he was no better than a street beggar; he refused to acknowledge that his own intelligence and determination played any part in his transformation from cigarette boy to heart surgeon.

In 1956, Chen was assigned to be the director of An Xan Staff Hospital in Northeastern China, in a steel manufacturing town. He was at first reluctant to go because it meant that he could no longer look in on Grandfather, but it was hard to refuse such an assignment, for in those days people took the jobs the government gave them.

Grandfather was only 70 when he died in 1958 from heart disease; the equipment that could have saved his life was not available in Shanghai. My uncles have said that if Chen had still been in Shanghai, the outcome might’ve been different, for he would have gone to any lengths to acquire the facilities Grandfather needed, and performed the surgery himself. The family wrote to Chen of Grandfather’s death, but didn’t know if he received the news.

Twenty years later, shortly after my Grandmother died, Chen came back to Shanghai and looked up our uncles. After that, they never saw him again, for I don’t believe our uncles were ever that friendly with him.

I feel as though the story of the cigarette boy speaks for itself as a testament to Grandfather Mao Ba's humanity.

All I know of the cigarette boy is what my mother has told me. It’s clear that the orphan boy was lucky he ended up with the Mao family, but I think Grandfather was fortunate also that Chen turned out to be so intelligent and dedicated. I wish I knew what sort of person Chen had been. Perhaps he learned compassion from his mentor and treated all his patients as my grandfather would have treated them. Or perhaps he channeled all his affection to my grandfather, leaving little for anyone else.

I wish my uncles had stayed in touch with Chen, because in many ways Chen shared more of Mao Ba’s life than his own sons and might have offered more insights about my grandfather. Perhaps there was some jealousy in the relationship, because although he was an adopted child, and unofficially adopted at that, of all the children in the family, he was the most successful and the only one who had managed to follow in Grandfather’s footsteps.