The Library of Legends Launches

Welcome to my family stories. They were misplaced during a website migration years ago, and now I've found them. There are 22 in all and I will do my best to post one each week. If you've ever read the Author's Notes at the back of my novels, you will know that family memoirs and stories about my ancestors often make their way into the books - so if any incidents in these stories feel familiar, it's probably because they've been used in a novel. But which one? I did use this story in a first draft of THE LIBRARY OF LEGENDS but alas, it did not survive the editorial purge.

T he Chinese have a saying that it takes one generation to earn wealth, one to enjoy it, and one to bankrupt it. Many families hung on, surviving for hundreds of years riding such multi-generational cycles of fortune and failure.

When my grandfather Mao Ba became one of the leading citizens of Pinghu, he made it clear to his bankrupt family, who lived in the town of Tongxiang, that his obligations extended only to his parents, for if he had given financial assistance to one sibling, the others would have felt entitled as well. He sent his father a modest monthly allowance that allowed the old man to live comfortably, and extended annual invitations for his father to stay with him in Pinghu for a few months each year. 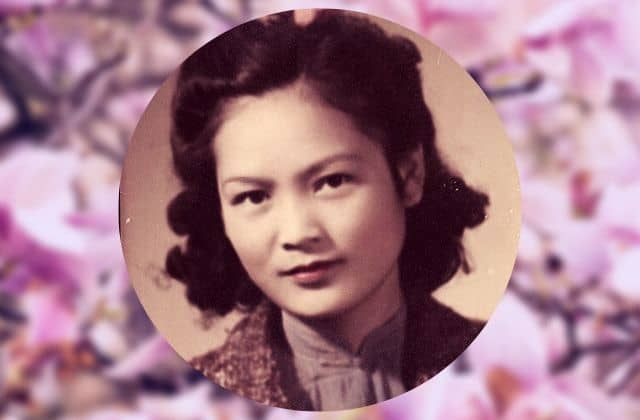 I don't have a photo of the cousin from this story but here's one of my mom, who was quite the babe.

Grandfather’s younger brother was an opium addict who received no direct help from Grandfather and was in fact absolutely forbidden to visit Pinghu. His two sisters had married into families that had also fallen on hard times. All this happened while Mao Ba was still a student, unable to provide any help.

His youngest sister was particularly unfortunate. She had been married off to the youngest son of a clan named Sun, a family even more impoverished than her own. Mao Ba felt that he owed this youngest sister some extra support, but rather than sending her money, he helped by sending for her two children to live in Pinghu as part of his household, where he paid for their schooling.

The younger child, a boy of six, shared a room with his cousins, my uncles Zhong and Xing. The little boy wet his bed every night. Since there was no such thing as plastic sheeting back then, his mattress needed frequent replacement and the room reeked. Finally Grandmother and my uncles could stand it no more, and after three years the unfortunate young cousin was sent back home.

His older sister, Yun, however, was a different story. She was ten when she came to Pinghu and her dainty beauty was already evident. Her fine eyebrows drew a perfect arc against her pale skin. Her cheeks invited comparison to lotus petals when she blushed. Her mouth was a perfect small pout that made her look innocent rather than coquettish. She was quiet and obedient, as befitted a poor cousin living on charity, and no one knew what she really thought or felt.

After completing primary school in Pinghu, my mother’s cousin was sent to Ningpo for further education at a boarding school run by missionaries. The school was a practical one, for the teachers recognized that the poor and orphaned girls in their care were destined for humble lives. Their classes emphasized homemaking, childcare, and rudimentary nursing skills. Although she was conscientious at her studies, Yun was actually not very bright. She didn’t qualify to go on to college for nursing or teaching. Her only option was marriage.

Grandmother made enquiries around Pinghu and Grandfather supplied a modest dowry. When she returned from boarding school, Yun was betrothed to the only son of the Widow Chen, who lived in an ancient house only a few streets and one bridge away from the Mao residence. She considered it a good match for her son to marry a relative of the esteemed Doctor Mao.

The Widow Chen was a petite and formidable woman who had been sole ruler of the household since her husband’s death twenty years earlier. She had raised her son strictly and traditionally. She expected and received total obedience. One reason she’d agreed to this marriage was because she liked the idea of a daughter-in-law trained in the modern domestic arts. She had enquired in detail as to the curriculum at the missionary school and was pleased to note that it included nursing, for she had the comforts of her old age in mind. Her son had no opinions one way or another as to his choice of bride, expecting only to please his mother.

But when the young man met his future wife for the first time, his timid heart fairly leapt with delight, for she had grown into the most exquisite woman ever to cross the threshold of any home in Pinghu. Her skin was fine, pale and lustrous, her small nose perfectly formed, and her modestly downcast eyes contrasted with strong eyebrows that lent boldness to her beauty. The Widow did not approve of such excessive loveliness in anyone, and resolved to keep Yun indoors as much as possible once the young woman was under her roof.

A few days after the wedding, Widow Chen was annoyed to see her son transferring his attentions from her to the bride. He met his mother’s demands out of habit; his wife’s modest requests he gave into with besotted willingness, without even thinking.

The Chens were not wealthy. Chen had a small income as a bank clerk to augment the money his mother received from renting a few shabby houses nearby. But emboldened by new emotions, and wanting to prosper for the sake of his bride, Chen wrote to a school friend in Shanghai and was referred to a position with the Shanghai Telephone Company. He jumped at the chance to move away from home and to take his new wife with him. He immediately resigned his position at the bank.

However, it turned out to be much harder to justify this decision to his mother, who did not want her son away from her side. But finally, even Widow Chen realized that since her son had resigned so suddenly and rudely, he could not go back to the bank; therefore his only option was to take the job in Shanghai. The young husband left for Shanghai, promising Yun that on his next trip home, he would take her.

The Widow Chen envisioned the young woman living a decadent high life in the big city and forbade Yun to join her husband. There was no possibility of her moving to Shanghai with the newlyweds for she couldn’t trust her tenants to pay promptly each month if she lived elsewhere. She saw no selfishness in wanting her son to live with her, or in expecting her son’s wife to be completely obedient to her wishes. The Widow Chen declared that since her son had already caused her to lose face in the community by living so far away, the least he could do was to leave his wife behind to care for her needs.

So for the next year, Yun lived in her mother-in-law’s house, rarely allowed to go out, for the widow feared her beauty would attract other men who would take advantage of her son’s absence.

On each of his visits home, Yun besieged her husband with entreaties to let her go with him to Shanghai, for she believed her place was beside her husband and life with a demanding mother-in-law was difficult. But after each visit he left Pinghu alone, not daring to disobey his mother. Yun began to reveal her disappointment in his lack of backbone, treating him with a cool courtesy that spoke volumes and broke his heart.

Chen’s defection to Shanghai was the only risk he had ever taken, and that risk was turning out to be a long-running saga of discord. His work suffered so much from the distraction of his domestic conflicts that his supervisor wrote him a stern letter of warning. Chen was devastated.

How can anyone be sure that things might have turned out differently? If only Chen had been a stronger person, if only he had stayed in Pinghu, if only his mother had not been such a tyrant, or his young wife so obvious in her scorn.

Yun received a telegram one day from Chen’s manager, to say that her husband had committed suicide.

It was a hasty and abysmally attended funeral, for suicides were considered unlucky. Afterwards, the two women had their final falling out. Each blamed the other for the unhappy situation that had led to Chen’s suicide. The Widow Chen lost the battle when Yun left Pinghu to live with her family in Tongxiang. Now the old woman had no one to berate and no one to share in her grief.

The Widow Chen’s hostility then extended to my grandparents, for now she blamed them for tricking her into taking Yun. It was well-known that the Mao household was progressive and open-minded, so it stood to reason that Yun’s thoughts had become irresponsibly modern during her time there and at the foreign mission school. The sympathies of neighbors and friends lay with the young woman, and they blamed the old woman for being so stubborn and selfish. She lived for five more bitter years, and was killed when Japanese bombs dropped on Pinghu.

As far as my mother knew, her beautiful cousin was still living in Tongxiang when the war broke out. Soon afterwards my grandfather and his family left Pinghu for Shanghai, and then lost contact when war scattered Grandfather’s family to parts unknown.

In all the stories so far, it would appear that the supreme authority in the Chinese family is always the patriarch. Yet in reality, quite often it was the matriarch who wielded absolute power. Consider the fact that wives were often much younger than their husbands and tended to outlive them.

For centuries, what a young wife could expect was years of total obedience to her husband’s family. She addressed her in-laws as ‘Mother’ and ‘Father’. Her survival depended on a serene, carefully powdered face. Until she delivered an heir, her status was tenuous. Concubines who gave sons could displace a sterile First Wife, who even servants feel free to bully. Her sole redemption was to deliver sons.

She waited for the older generation to pass away, first her father-in-law and a dozen years later her mother-in-law. Then she and her husband could take their places to rule supreme. But it is once her own husband died that the former First Wife truly came into her own. Her son may have taken her husband’s place as patriarch, but she was mother to the patriarch. In households obedient to Confucian ethics, she was now the most revered person in the household. As matriarch, her every whim was a command, her lightest remarks an affliction to her son’s wives.

How many generations of young women held their tongues, restrained rebellion, and endured abuse, biding their time until at long last, they could impose their will on the family they had served for so many years? This is worst-case scenario of course, but it was a situation that happened all too often. Yet many women also found ways to work behind the scenes, using family politics and customs to their advantage. In Three Souls, I used the character of Stepmother to convey how a woman of intelligence and patience could become influential and respected.