Visit to an Amazon Bookstore

I am thrilled to have the news out on Publishers Weekly. YES! There is a third novel in the hands of my editors and there is a release schedule: May 2019. The May date makes The Husband very happy because in his words “I am not touring with you in winter to Toronto again.” 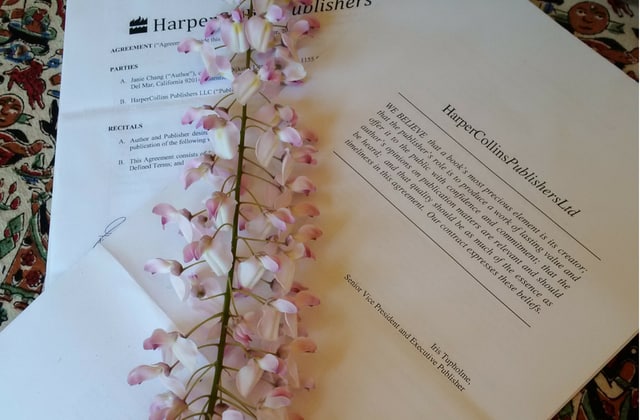 Publishers Weekly shortened the announcement from my agency, but here is the original text:

In a simultaneous Canadian and U.S. acquisition, Iris Tupholme at Harper Canada and Jennifer Brehl at William Morrow have bought Janie Chang's historical novel (working title: WANDERING STAR), for publication in May 2019. Author of the critically-acclaimed THREE SOULS and Canadian best-seller DRAGON SPRINGS ROAD, Janie's upcoming work follows the exiled students and staff of a university forced to evacuate their campus in 1937 when Japan invades China. They must walk a thousand miles to safety while protecting a national treasure: a 500-year old library. The story was inspired by Janie's father, who was a student-in-exile. Jill Marr represents the author on behalf of the Sandra Dijkstra Literary Agency.

I’m excited and nervous. Editor Iris has sent a quick note to say she’s finished reading the draft of WS and enjoyed it very much. I'm so relieved. And now I will be waiting for the editing notes to come back and then you can guess what I’ll be doing for the next several months. At this point, as long as the feedback doesn’t include words such as “steaming pile of …” I’m happy.

The setting for WANDERING STAR is based on an episode of history not well-known outside of China. In 1937 when Japan went to war in China, universities and middle schools in the path of the invading enemy packed up and fled. Students, professors, staff and families who lived on campus traveled with what they could carry. Libraries, lab equipment, even precious imported livestock from animal husbandry programs were loaded onto carts. They walked, rode on trains or boats when possible, heading west and southwest to the interior of China for safety. My father and uncle were part of this exodus, walking more than a thousand miles with their school mates to a temporary campus where they stayed until the end of the Second World War.

I hope you think this makes for an interesting story! And yes, there will be supernatural elements on this journey.

And now I have a very heartfelt and serious request: if you haven’t already done so, please sign up to my newsletter. There’s a quick sign up form at the very bottom of the page and another at the top of the right sidebar.

Why? In a word, Facebook. I don’t want you to depend on Facebook to get important news. Because chances are you won’t.

Leading up to the release of this third novel, my publishers and I will be holding giveaways and promotions. But Facebook is getting more and more restrictive so I worry that you won’t see them. Once upon a time, if you had 1,000 Facebook fans, all of them would see whatever you posted. Then a few years ago, Facebook throttled this and allowed only about 15% of fans to see a post. Why? Because Facebook then got to remind you that with a few advertising dollars, they would increase your reach and allow more fans to see that post. Because they treat fan pages as BUSINESS pages.

But lately, my gut has been telling me that fan responses aren't generating the sort of reach as before. So I checked my stats and I’m right. A recent post in 2018 with the same number of LIKEs as a post from a year ago now generates only half the reach. Admittedly this is based on 3 – 4 data points and is it really half? But let’s not quibble. Articles about Facebook’s latest News Feed algorithms confirm that they’re throttling even more in pursuit of ad dollars. And that’s their business model.

There will be giveaways. Promotions. A free first chapter of the new novel. Cover designs and decisions to share. Book tour news. Historical and family tidbits related to the book. I could be really obnoxious when I post these and urge you to Share! Share! Share! And hope that with your help, a higher percentage of fans will see the news.

Or I could send newsletters when something useful happens. No spam, I promise. Newsletters are a lot of work when it’s just one person doing it all so believe me when I say Only When Something Useful Happens.