The Fox spirit is one of the most popular creatures in Chinese mythology, as familiar in the canon of Chinese folklore as leprechauns are in Irish fairy tales. Every child knows about Foxes who take the shape of beautiful women and trick men into marriage. In contemporary Asian pop culture, there are films and TV shows featuring seductive Fox women. Yet these interpretations are simplistic and don’t give the Fox enough credit for its place in Chinese history, legend, and literature.

The Classic of Mountains and Seas (or Shan Hai Jing) is an ancient text with entries that date from the 4th century BCE to the 2nd century BCE. In this compilation of mythical and fabulous landscapes, the Nine-Tailed Fox is mentioned as companion to the Queen Mother of the West, a goddess who first appears 33 centuries ago on an oracle bone inscription from the Shang dynasty (1600 – 1046 BCE). During the Han dynasty (202 BCE – 220 CE), the Fox and the Queen Mother of the West could be found together depicted on funerary artefacts. With the Fox as a helping spirit, the Queen Mother could transcend worlds, guide the deceased to heaven, and confer immortality. The Fox was therefore an auspicious omen. 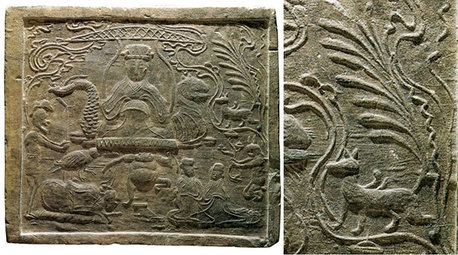 Ancient carvings of the Queen Mother of the West with foxes in attendance; detail showing a nine-tailed Fox

With the rise of Daoism in China, the Queen Mother evolved into the equivalent of the Buddhist Goddess of Mercy, and by the Tang dynasty (618 – 907 CE) had become the patron deity of women without family – Daoist nuns, courtesans, and female artists. There were suggestions that Foxes acted as messengers to the Queen Mother; there were also writings that referred to Foxes as celestial beings that lived in the Palace of the Sun and the Moon – definitely not demons. This made Foxes suitable candidates for worship. Foxes eventually came into their own and were no longer associated with the Queen Mother of the West.

Believed to be immortal, Foxes have been characterized variously as tricksters, drinking companions, avengers, scholars, seductresses, and faithful lovers. Always mischievous and sly, Foxes are nevertheless known for being intelligent, devoted, and good company.

Fox worship persisted into the Qing dynasty and survives even now in rural areas. The Fox cult has been curiously personal, influenced by local traditions; it varies by region, village, and even by the individual worshipper. Fox shrines tend to be humble, small altars or niches set up in backyards and bedrooms, with incense and offerings placed on boxes or an old table. Worshippers prayed for sexual fulfillment, fertility, wealth. 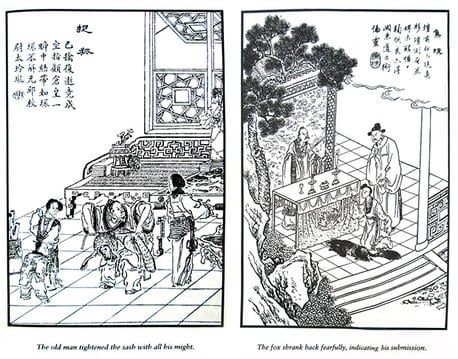 Foxes could also befriend humans. In Four Sisters of Hofei by Annping Chin, a memoir of pre-revolutionary China, one of the sisters recalls her mother’s family and their affinity for Foxes.

“Lu Ying was a woman of uncommonly good sense, and maybe this was the reason she believed in fox spirits. Many Chinese women in traditional society share the belief. They did not see it as a reflection of ignorance or something at odds with their religious practice … An aunt in her mother’s family claimed fox spirits lived in the storage room above her. A daughter-in-law in the fox family was said to be the liaison between the two worlds … One New Year’s Eve, the fox-woman brought cakes, dried fruit, jujubes, and gift money for the aunt’s newborn…On this occasion, the fox sat by this woman’s bedside, and the two chatted like old friends.”

Strange Tales from a Chinese Studio, an 18th century collection of folk tales about the supernatural, featured a number of love stories between beautiful Fox women and young men, forever popularizing Foxes as seductresses. From operas to movies such as Painted Skin and The Fox Lover, fox spirits have provided rich material.

In Dragon Springs Road, the not-quite animal, not-quite human, not-quite celestial Fox is a perfect foil to the main character who is half-Chinese, half-Western, belonging to neither society. I have attempted to counter pop-culture by giving Fox back some of the dignity of her ancient roles. She has a higher purpose than mere mischief. I've also taken the liberty of giving her an extra power. For this, there is precedent. Are there not retellings of fairy tales? Fox-lore is only what humans understand of Foxes, and we only see what they allow us to see. Plus, novelists have always shaped myths to suit the theme of the story – in this case, one of identity and the decisions we make to be true to ourselves.