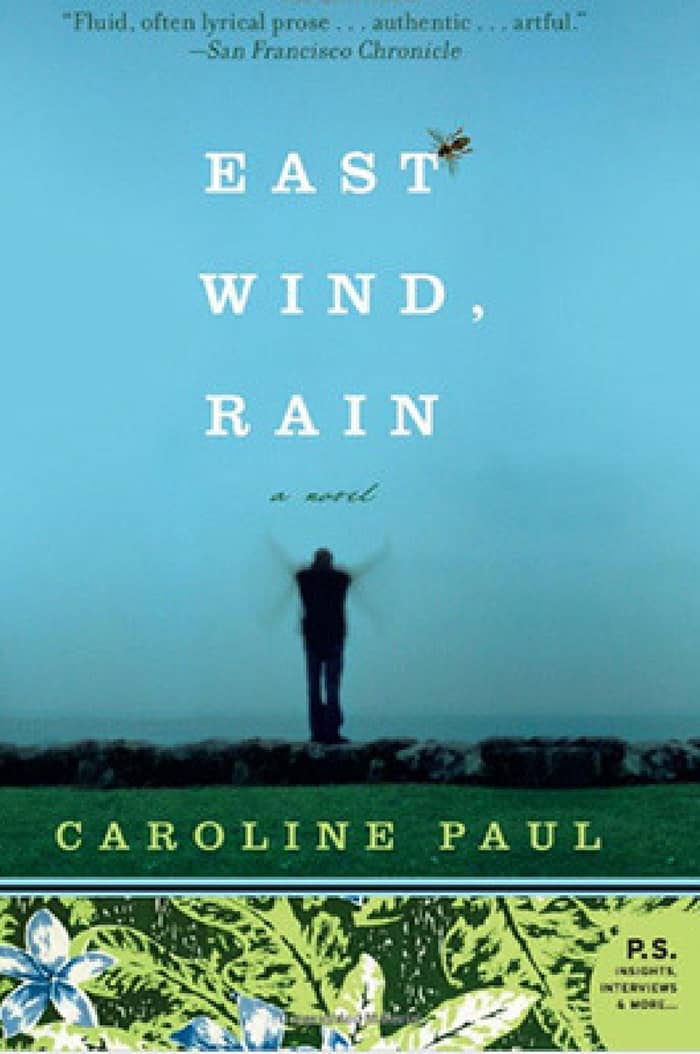 Y I’ve been wanting to write a review of East Wind, Rain by Caroline Paul for at least a year, but so many other commitments got in the way, the biggest one being the deadline for Dragon Springs Road. So finally, here goes!

The Honolulu Advertiser’s review of the book says “Savor the description. Notice the details. Feel the feelings. Think about the issues. They're still with us."

I read the novel again for this blog and yes, the issues are still with us.

The title of East Wind, Rain comes from a coded weather report the Japanese used during World War II to signify an attack on the United States. The novel is based on a true and little-known incident from the attack on Pearl Harbor when a Japanese Zero crashed on Niihau, a private island whose inhabitants are isolated from the rest of Hawaii. The premise is riveting, the story is compelling and mythic. It’s history told as psychological drama.

In the novel, Niihau’s residents are mostly native Hawaiians who work on the Robinson ranch. Owned by the paternalistic Aylmer Robinson, the island is closed to visitors because he considers it his duty to preserve the islanders’ innocence. The workers comply with their employer's strict rules, products of a Calvinist upbringing.

No electricity or telephones, no automobiles or newspapers. Prayers five times a day. Niihau is its own country. Living in near-total isolation, the residents have no idea of the war going on in the world outside. There is one radio allowed, owned by Yoshio Harada, the Japanese-American foreman, and his wife Irene. Because of the radio, they are aware of the tensions in the Pacific.

The novel begins with the arrival of war, in the form of a Japanese Zero fighter plane.

"When the plane finally crashed, onto the dry, rutted grass and into a fence, it did so with a hiss and a sigh … No boom, or ban, or screeching rent of steel … As if in deference to the quiet island, it crashed with gracious aplomb; a long, low exhalation, right into the ground."

The young pilot survives the crash and what follows is a slow unravelling of loyalties, faith, and relationships.

Because all boats and planes are banned from leaving any island in the aftermath of Pearl Harbor, Robinson fails to come for his monthly visit to the island. Howard Kaleohano, the village elder, urges his neighbours to be patient. Until they have new instructions from Robinson, they should simply follow the rules they’ve always lived by. In the meantime, the pilot is under a loose form of house arrest. After all, he can’t get off the island.

But Howard has an idea of what’s happening in the world because he reads the newspapers that are wrapped around goods from the supply boat, and gradually he pieces together the clues and realizes what the pilot’s presence means.

Yoshio and Irene Harada, American citizens born in Hawaii, speak Japanese and understand what the young pilot tells them but can’t ascertain its truth – whether Japan has mounted a successful invasion of the USA. They hesitate to tell their Hawaiian neighbours that the pilot didn't have an accident, that it's an act of war. They worry about being regarded as enemies once the news gets out. Should they help the pilot so that they’ll be spared when the Japanese take over? Or should they refuse?

In all their time on Niihau the Hawaiians have been nothing but kind to Yoshio and Irene. But Yoshio’s patriotism is undermined by the racism he’s encountered in the past and his anxiety is stoked by Robinson’s absence. Has Japan really taken over Hawaii and the rest of the USA? The couple’s fear escalates and divides them. Irene is convinced their neighbours will retaliate when they realize the US and Japan are at war; she believes that only other Japanese will protect them so they’re better off siding with the pilot. And despite his resolve to stand up to Irene, Yoshio remembers occasions when he was humiliated by white Americans during his time in California.

Nishikaichi, the twenty-one-year old pilot, struggles with the shame of failing his duty. He should’ve crashed into the sea and kept his plane and papers out of enemy hands. Now he must convince the Haradas to help him get his papers back from Howard, by making them understand they’ll always be second-class citizens in the country of their birth. Yet this goal sometimes escapes his mind as he succumbs to Niihau’s quiet isolation, surf beaches and leisurely pace of life. Their questions unanswered and without the reinforcement of Robinson’s visits, the villagers turn to the gods of their grandparents -- as well as Jesus. The downed airplane begins vanishing bit by bit as pieces of the wreckage disappear, then reappear as offerings for the altar in the deep caves where previous generations of Niihauans used to worship and hide from danger.

The young Japanese pilot’s fate is inevitable rather than predictable. So is Yoshio’s decision. But it’s all in the telling.

I’ve learned how complex emotions are needed to create powerful tensions in a story, especially if the story is character-driven. You’d think this would be self-evident, but I’ve never really thought about the importance of layering on emotions when a character’s motivations are pivotal to the story.

Caroline’s portrayal of how Yoshio deals with his misgivings is multi-layered, never simplistic. He straddles two cultures, as so many of us do, who are immigrants and children of immigrants. It would’ve been tempting to ascribe his decision solely as a response to racism; instead it’s all tangled up with the values of his Nisei upbringing, his notions of honour and loyalty to the Empire of his ancestors, all of it battling with duty to his employer -- who he hopes will appear and relieve him of the need to take responsibility for a volatile situation.

Yoshio is driven by the desire to protect his wife and daughter. From the beginning of the story, we recognize his desperate, constant need to win Irene’s respect, and in doing so, regain his own self-respect. This last is rooted partly in his overwhelming love for her and partly in his feelings of inadequacy, which in turn stem from the humiliations he suffered at the hands of white Americans on the mainland. Which then feed the possibility, even hope, that if Japan is truly victorious, then for once Yoshio could be on the winning side. He could be the oppressor, the superior man. Yoshio’s weaknesses and fears are revealed as he falls under the influence of Nishikaichi and all that the pilot represents.

He was handsome, yes, but it was more than that. The uniform, for one. Even though it was blotted with dust and sweat, it was an impressive piece of clothing: hemmed and pocketed and riveted and seamed for every eventuality. He wanted to tear it suddenly from the pilot and put it on himself …

When so much of a story depends on a character coming to a difficult decision, those emotions must be complex to drive ongoing conflict, the character pulled in multiple directions until something finally clicks. To every reaction there should be a suitable reaction, and perhaps even many incompatible reactions. From now on, I’ll be paying more attention to the weight and complexity of emotions versus their consequences.

When I first read this novel, I admired the way it explored the conflicts around allegiance and identity. Reading it again now, the ‘what-ifs’ ring even louder in my mind. If there had been a Yoshio, would he have acted differently if he’d lived in a society that treated him fairly? Upon revisiting this novel it reinforced my belief that the way we treat each other affects lives more than anything any government can command.

NOTE: Strange but true: I first discovered Caroline Paul through her illustrated book Lost Cat. I've always wanted to put a GPS tracker on our cat but The Husband vetoed it. Fortunately with age, Mischa has lost the need to roam afar.