I thought it would be fun to blog about the questions I get asked most often by book clubs and at readings. People are always curious about the process of writing and getting published. Yes, and there’s always a question about those pesky souls. 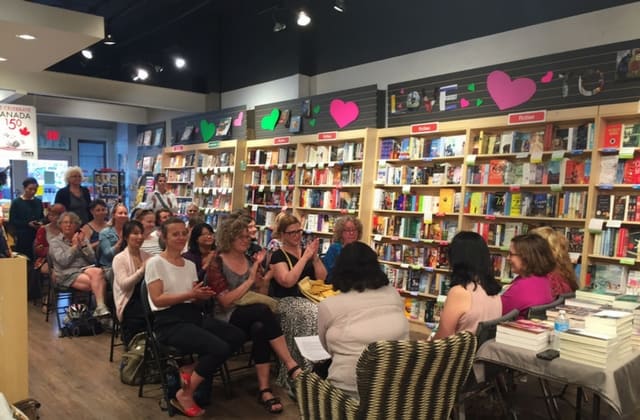 When you work with editors, aren’t you worried they’ll want you to change your story?

That was definitely a concern at the back of my mind, but now that I`ve been through the editing process, I don`t worry anymore. My editors at HarperCollins never, ever pushed in that way. Think about it – they bought your book because they loved it. Publishing is such a tough and risky business these days that no one is going to buy a debut novel unless they fall in love with it. So they’re not going to change the book they fell in love with.

What they will do is provide feedback on how to make the story deeper, make the characters more alive, or strengthen motivations.

For me, every round of feedback from my editors was like getting a master class in manuscript polishing from top professionals -- which is what they are, of course. They pointed out inconsistencies, or that a character needed more rounding out, where a scene could use more drama, or where dialogue could add context and so on.

They never told me how to make the changes or what words to use. They always stressed that the book was mine, not theirs. So if I agreed with their feedback and made revisions, they were my changes and consistent with my ideas about the story. I loved the editing process! But I also recognize that I’ve been very, very lucky to have empathetic editors who respect the author’s vision.

OK, where did those three souls come from?

The scene at the beginning of the book flashed into my mind one day of a ghost looking down at her own funeral. I knew that had to be the start of the novel. So then I had to research the Chinese afterlife. China is an ancient civilization and home to a multitude of belief systems. Depending on whether it was Daoism, ancestor worship, or various folk beliefs, I read about three souls, seven, ten, or eleven souls. I decided three was quite enough.

When I tried to find out what these multiple souls are actually supposed to do, what role they played in the afterlife, there wasn’t much there. As a novelist, I figured this gave me the freedom to fill in the gaps. I cast the three souls as Leiyin's companions in the ‘afterdeath’, each representing a different aspect of her character, apart from but still part of her.

How did you get your agent?

Prevailing wisdom says you’re supposed to find an agent who specializes in your genre. You know, go searching online for agents and see what kinds of authors they represent. In the old days, it was: go to the library and pull out a bunch of books similar to yours and read the acknowledgements to see which agents the authors thanked.

I decided to use a service called Agent Research and Evaluation. They have a database of literary agents: names, which authors they represent, what books they’ve sold to which publishing houses and which editors. They also have their ear to the ground on the latest about agents – who’s looking for new authors, which ones are about to retire, their reputations. You send them a description of your work, something about yourself, and for a fee, they recommend five agents who would be the most sympathetic to your type of book. And they help you with the query letter and provide all kinds of follow up advice. Sometimes outsourcing is a better decision and for me, AR&E was the way to go.

The Sandra Dijkstra Literary Agency was their top recommendation because SDLA also reps Amy Tan, Lisa See, Maxine Hong Kingston, Anchee Min – you get the idea. So when I found out that Jill Marr from SDLA would be coming to a local writers’ conference, I registered for the event, and signed up for 10 minutes with Jill to pitch her on my story. I wouldn’t have known to make a beeline for her without AR&E’s recommendations.

I’m very lucky to have Jill. She’s a lot of fun and very persistent. She’s like a cross between business manager and high school career counselor, except now that I’m not a teenager, I listen.

What made you decide to write a book?

The short version is: Life got to a point where it was now or never. I just had to.

The long version is: I always wanted to write. I also wanted to be eligible for a mortgage, and the two weren’t compatible so I opted for the mortgage. Over the years, it became pretty clear that it wasn’t realistic for me to work in a high stress, high tech job and also have the time to write. Not to mention learn how to write. Then life hit a few rocks – the kind of stuff that makes you reassess where you are and how much progress you’ve made toward your dreams. I decided to re-organize my life and make time to (a) learn the craft of writing and (b) write the damn book.

How long did it take you to write your book?

Writing for 2 – 3 hours every night, 6 – 7 nights a week, no movies, no dinners out, not even watching BBC Masterpiece Theatre, it took me about 18 months to get the manuscript to a state that I felt would be OK to show a literary agent. After my publisher bought the book, it took a few more months of editing. 100,000 words is a lot of work. (To be perfectly honest, I did watch Masterpiece Theater but only Sherlock and Downton Abbey)

Have you quit your day job?

Oh, all right. During my very first creative writing class the instructor came right out and said “You can count on one hand the number of Canadian authors who support themselves solely on book sales. Most have a day job, or they teach writing, or they freelance, or they have a supportive spouse. If you’re in this for the money, think again.”

I’ve been informed since that my instructor was wrong. You can actually count on two hands the number of Canadian authors who support themselves solely on book sales. That’s very encouraging, don’t you think?

From what I can see, to earn any kind of serious pocket money, you need to keep writing more books to build up a backlist and a readership. It kind of works like compound interest. And before you say anything, Harper Lee and Margaret Mitchell are exceptions. One book is not going to do it for us mere mortals. There was an interview with Ayana Mathis, whose debut novel, The Twelve Tribes of Hattie, was an Oprah’s Book Club pick. She was asked whether she could now give up the day job and I think she replied along the lines of “Not even close.”

If I were to amortize my book advances over the number of hours it took to research, write, and edit Three Souls, I’m pretty sure it would come out to $0.72/hour.

Here is the unasked question: So, why do you write? Why do writers invest years of your lives into an endeavour that produces so little financial return?

I can’t speak for anyone else, but I write because I love doing it. When you’re in the zone, when you have escaped totally into the world of your novel, it’s unimaginably wonderful. Those are the moments when you experience what Michelangelo said about the statue already being in the stone, he just had to chip away what didn’t belong. When I’m writing and it’s going well, it feels as though I’m living in that world and just documenting the story that’s been there all along.