Canadian Authors and US Taxes

D ense with imagery, tense and skillfully plotted, Truth Like the Sun kept me reading as compulsively as if it were a news-breaking story clattering out of a teletype machine. Jim Lynch’s story is set in Seattle and alternates between two time periods: 1962 when the city hosted the World’s Fair, and 2001 in the post-dotcom days, shortly before 9/11. The plot centres on two very different people: the famous yet enigmatic Roger Morgan, who masterminded the World’s Fair, and Helen Gulanos, a reporter intent on making a name for herself. When she senses a story behind Roger Morgan, who is emerging from retirement to run for mayor, the chase is on.

I was drawn to this novel depicting recent history because, like Seattle, Vancouver hosted a World’s Fair that put the city on the map. Lynch captures the atmosphere of excitement, anticipation and fatalism that engulfed Seattle and the Fair’s organizers in the days before it opened. Again, I can relate because in 1986, Vancouverites also waited to see whether Expo ’86 would do us proud or do a very public, global face-plant.

In the Seattle of 1962, Roger Morgan is the golden boy. He is the man who sketched the idea for the Seattle Space Needle on a napkin, charmed the sponsors, and infected the media with his unalloyed faith in the Fair’s success. 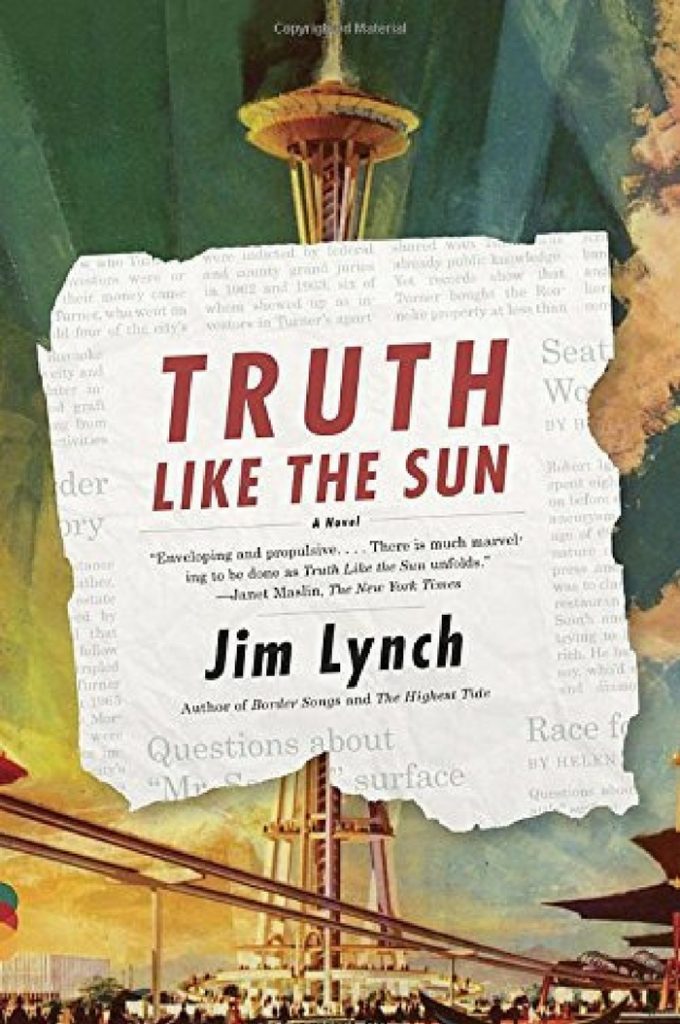 His was the name that opened doors. In the Seattle of 2001 however, a 70-something Roger discovers that running for mayor means his past becomes fair game for excavation, whatever the game might be.

Roger’s kept a low profile for decades and hasn’t held a real job since the Fair: how has he earned his living? Was he involved in police corruption or cronyism, was there insider information being traded for investments in Seattle’s real-estate hothouse? Helen is convinced she can expose him. The novel shows us 1962 and the darker side of Roger:  roaming into cheap bars for a few hours of gambling, his ambivalence toward his fiancée, ambiguous business relationships.

One of the best ongoing battles in the novel takes place in the newsroom, where the ethics of investigative journalism keep getting unseated by pressure to print the latest and most sensational news before anyone else does.

The other is the relationship between Roger and Helen, although neither would call it a relationship. These two are the true marvel of this character-driven novel. Roger, who should know better, thinks he can keep her charmed and off-balance, at arms-length but within observation. Helen keeps coming back, hoping to catch Roger off-guard or to wear him down. When she’s not chasing down leads, she sifts through piles of old press clippings about the Fair and Roger – the necessary drudgery of newspaper work, given plenty of respect by Lynch, a former journalist.

Lynch exercises his considerable ‘show-don’t-tell’ skills on his characters. They are fully-formed and so real you can smell them. Helen’s aggressive determination is revealed through one of her less-ethical interviews, in a nursing home where she has managed to corner Roger’s mother, a woman who lives in a state of sweet confusion. Helen constantly recasts information as copy, gets into the zone of “redesigning the story so feverishly in her head that she glided through a red with that familiar rush of clear thinking that comes with attempting to not only get everything precisely right but also to make it engaging, even irresistible, maybe even artistic – without bending a single fact, on deadline.”

We see Roger in 1962, young and confident in public, the face of Seattle, his smile smoothing over the million-and-one things that could go wrong at a World’s Fair, at ease greeting celebrities from Vice President Lyndon B. Johnson and Prince Phillip to Elvis Presley. In 2001, he’s become part of Seattle mythology. Even as he slices through her façade, he possesses more compassion than Helen gives him credit for. He has a pragmatic sense of humour and retains the charisma of his youth. Yet while we get a feel for Roger the human being, Lynch keeps us dangling along with Helen as she trails after shady rumours, wondering whether there is a smoking gun in Roger’s past.

While Roger, Helen, and their immediate circle are fictional creations, the events of the Fair and the celebrities who make their cameo appearances such as Edward R. Murrow, Ed Sullivan, John Glenn, and Count Basie are real and really did come to the Fair. The Space Needle did begin on a napkin, just not Roger’s napkin. Lynch’s interweaving of truth and fiction is totally convincing, his dovetailing of past and present is perfect.

There are quite a few things one can learn from this well-crafted book, but at the moment I’m interested in how to work effectively in two timelines so that’s what I’ll focus on.

How often have you read a book set in two timelines and wished the story could’ve stayed in the one you found vastly more interesting? Both timelines needs to be compelling. How does Lynch achieve this in his novel?

In Truth Like the Sun, Helen’s investigation and Roger himself are the threads that bind 1962 to 2001. Roger is at the centre of both timelines – this provides continuity.

But it’s the investigation that drives tension and our impatience to learn more. At the start of the novel, with the Fair a success, Roger is Seattle’s most sought-after commodity, everyone wants his blessing on their projects. By Chapter 5 in 1962, the boss of the Teamsters has sidled up to Roger. In 2001, we follow Helen as she chases down shifty and unreliable contacts, listens to innuendo, and attempts to produce tangible evidence of wrong-doing. Was he or wasn’t he corrupt? Did he simply have opportunities thrust at him or did he solicit them?

We read 1962 trying to find clues that Helen can’t possibly discover, unconsciously trying to race ahead of her; then we follow her relentless pursuit in 2001. The two timelines unfold like relay laps and with as much intensity, each handing over to the other the story baton. As a result, both are equally compelling.