My Sister the Moon

L et me start by saying that Native American prehistory is not one of my interests. The Ivory Carver trilogy, by Sue Harrison, is set in pre-historic Alaska, in the Aleutian Islands. They are proof positive that a good story can overcome a reader’s preference for setting. After reading Mother Earth, Father Sky, the first book of the series (which I reviewed on Goodreads) there was no question that I had to move on to My Sister the Moon.

The novel centers on sixteen-year old Kiin, who begins life without a name and without a name, she has no soul. She was deemed undeserving of a name.

Her life is a litany of domestic abuse: her father Gray Bird beats her for any actual or imagined shortcoming, and when traders come to the village, Gray Bird always tries to sell them a night with his daughter. Her younger brother Qakan is equally rough on her. Her mother, frightened into submission, can’t protect her.

Kiin’s life changes when she is made wife to Amgigh, son of Kayugh the village chief, who made a promise to Gray Bird when Kiin was a baby, that Kiin would be wife to one of his sons. It was a promise made to prevent Gray Bird from killing this unwanted daughter. 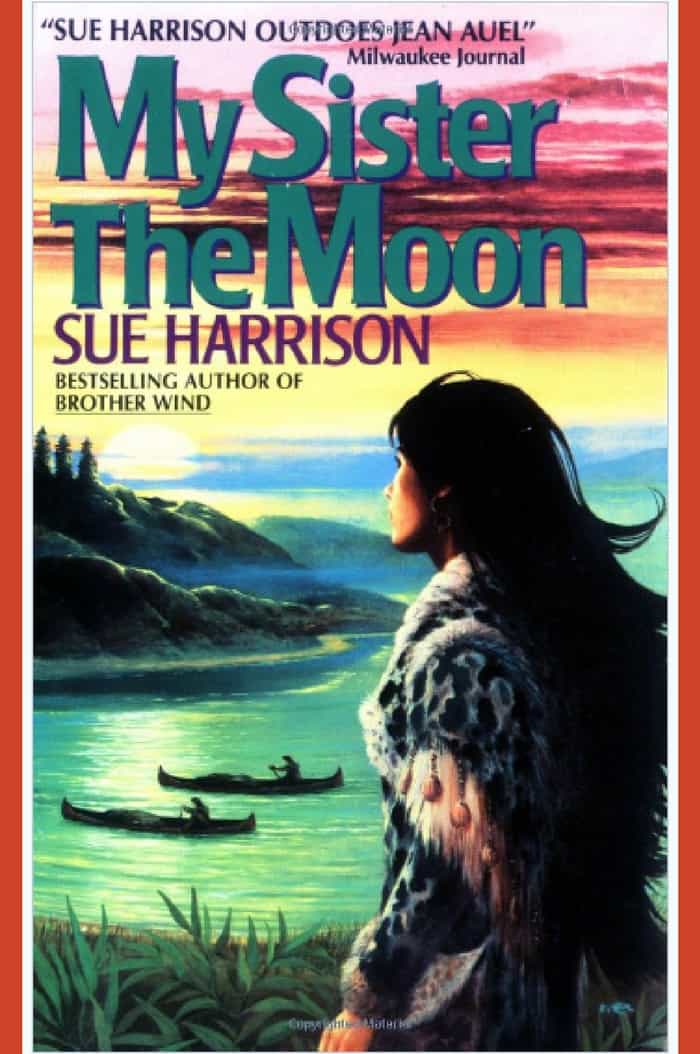 Kayugh’s household is happy and full of kindness. Kiin’s young husband is good to her. She tells herself she is lucky to have a husband at all, but she can’t help but wish for a different husband. Kiin is in love with Amgigh’s brother Samiq, and he with her. But Samiq’s destiny also has been decided: he is to move to the village where his maternal grandfather lives and learn how to become a Whale Hunter.

Yet even as a member of the chief’s family, Kiin is not safe. Hoping to become a trader, her brother Qakan steals furs and tools from the village to begin his career. Before he paddles away, he kidnaps Kiin – if he can take her far enough, he might be able to trade her to a man who doesn’t know Kiin's reputation - that she has no soul.

At the start of the book, Kiin is archetype of an abused woman, a victim of domestic violence. She accepts that she deserves only ill-treatment. But her inner voice grows stronger as her will to survive asserts itself during the voyage with her brother. When she realizes she is pregnant, it becomes even more imperative for her to live. Yes, there is a love triangle in the novel, but for me the most interesting journey is Kiin’s escape, physically and emotionally, away from domestic violence. Her mental state and low self-esteem give way to a cautious confidence in her carving skills and her worth as a woman.

It’s not an easy story to read, but so compelling and immersive you have to keep reading. It’s a highly disturbing yet absorbing journey, aided by well-developed characters and competent prose that puts you right in the Arctic landscape.

Harrison’s voice is straightforward, her sentences simple in structure. This may be for the sake of younger readers (see note below), but I found her prose strong and suited to the story’s setting. Even though Kiin suffers at the hands of cruel men, you never forget the impersonal cruelty of the Arctic, its’ dangerous emptiness, icy waters, and sudden shifts of weather. Harrison’s writing makes you shiver with the cold winds and salt spray, the harshness of the land, the precariousness of life. You feel chilled, your skin too thin.

(I was surprised to find reviews which categorized the series as Young Adult books, especially My Sister the Moon. In the Author’s Notes, Harrison says she borrowed the incest storyline from an Aleut sea otter legend.)

When I read fiction, I always hope for an experience that pulls me in to the book. The more unfamiliar the setting, the more readers need to learn about the culture, everyday objects, and events. One of the perennial challenges of historical fiction is how to draw readers into an unfamiliar time and place without thrusting information into their faces. We need to understand what’s appropriate to the time and place, otherwise we won’t appreciate the story’s conflicts – but we don’t want to get yanked out of the story to learn. There’s nothing more annoying than when a story veers off into a lecture about objects, clothing, or traditions and beliefs.

How can a writer convey how ancient tools worked or how a particular society was structured without turning paragraphs into social studies lessons?

Harrison never hands us a heavy, awkward chunk of information. Instead, she adds in the details of her world here and there, woven into her characters’ actions and dialogue so that when we read descriptions, they are natural and in context. We see things through the eyes of her characters as they think and talk. She trusts her readers’ intelligence to know that when a hunter goes paddling out to sea in an ikyak, he is in a boat; we don’t need an immediate detailed description about how it’s made from skins stretched over a wooden frame. That can come later.

Let’s look at clothing, a detail so essential to the mind’s eye of a reader.

(The worst example I ever came across was a novel where each character walked into a scene accompanied by a long paragraph describing his/her appearance. Every time. Every costume change. This isn't it, but it’s pretty close: “Lulu was five-foot eight, with black hair in a blunt bob down to her shoulders. She had pale skin, a Grecian nose and wide-set blue eyes. Her pouty lips were outlined in crimson and filled in with Chanel Power Red gloss. She wore black leather pants , a white silk blouse, black leather gloves and a black leather motorcycle jacket which fit tightly to her slim yet curvaceous figure. She stood on high heeled black boots with silver spurs that made her long legs look even more enticing. A bracelet of heavy, solid platinum …” You get the idea. I didn't read the past the first chapter.)

In the world of My Sister the Moon, there is no wool, cloth has yet to be invented, and it’s a climate for which clothing is not optional. People used furs and skins to fashion garments and boots. As readers, our frame of reference barely exists for this. Yet it’s essential for the novel to give us an appreciation of the ingenuity of this prehistoric culture; it gives us more respect for them, elevates them in our mind from primitive tribal folk to characters we can care about.

I found Harrison’s descriptions of clothing endlessly fascinating as she explained these early people's resourceful use of materials.

For example, a suk is a calf-length hoodless parka with a collar, reversible so that it could be worn with the feathers or fur on the inside for warmth. Our first detailed description of such a garment comes fairly early in the book, when Chagak gifts one to her daughter-in-law Kiin. It’s the most beautiful thing Kiin has ever owned – so it’s natural for her to admire and enumerate its features: “banded at the bottom with a ruff of white cormorant rump feathers hung with shell beads. The sleeves were cuffed with tufts of brown eider feathers and on the outside of the collar rim Chagak had sewn a strip of pale ribbon-seal fur, trimmed into a pattern of ripples, a blessing asked from the sea.”

Kiin tries it on, and it fits perfectly, “the sleeves ended just above her fingertips and the bottom edge fell below her knees.”

There is nothing contrived when a suk is introduced in this way. And now we know what one looks like.

Or, there is the chigadix, a waterproof garment sewn from whale tongue skin or sea lion esophagus. But how are the seams made waterproof? Harrison explains this in a scene where Samiq oils his garment with seal fat to keep water out of the seams. While he cares for his clothing, he muses how men can repair a chigadix but not make it watertight the way his mother and Kiin can. His mind wanders to a memory of Kiin working on a chigadix: “a double seam, sewn one way, then turned and sewn back another.”

Informative. Natural. Unobtrusive to the story.

When I write about objects, clothing, or traditions and beliefs, I’ll try to blend the descriptions into dialog, thoughts, or the action rather than write about them as standalone descriptions. No social studies lessons.