Send in the McGuffins

Working with a Freelance Editor

“Janie—I’ve taken a look at this and it looks wonderful! I’ve pitched it to our Canadian agent  to see if he might be interested in taking it to market in Canada at the same time I go in the US.”

First of all, it’s great that my US agent is affiliated with a Canadian agent who will pitch to Canadian publishers. Nancy Richler told me “it’s nice to have a Canadian publisher” but I forgot to ask her why. I suppose it means you get two advances instead of one, but maybe it also means you’re eligible for Canadian literary awards? 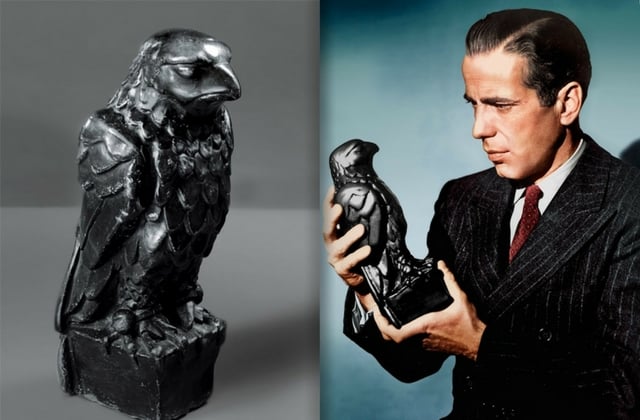 Next of all, what changes did I make to the first version that Jill saw ? The most significant change, one that proved relatively easy to accomplish in this manuscript, was bringing forward "the MacGuffin". It’s a term that Jill says they use a lot in their office, so I’ve been pondering MacGuffins.

According to Wikipedia: in fiction, a MacGuffin … is a plot device in the form of some goal, desired object, or other motivator that the protagonist (and sometimes the antagonist) is willing to do and sacrifice almost anything to pursue, often with little or no narrative explanation as to why it is considered so desirable. A MacGuffin, therefore, functions merely as "a plot element that catches the viewers' attention or drives the plot of a work of fiction". In fact, the specific nature of the MacGuffin may be ambiguous, undefined, generic, left open to interpretation or otherwise completely unimportant to the plot.

The most famous MacGuffin is probably The Maltese Falcon, which we never see in the movie. My husband, who plays his DVD of Ronin at least twice a year, immediately said “That suitcase in Ronin is a MacGuffin!” He's so cute when he gets excited.

The feedback Jill received from the two colleagues who did a partial read and one who did a complete read (the sub-rights manager) confirmed that the book is well written. The question was: how can we make it stand out from similar books? Avoid making it sound conventional? Her boss pointed out what she felt was the differentiator (“the big draw”) in the story.

We’ve all been told to write compelling beginnings and I figured that opening the book with a scene of the ghost at her own funeral was enough to keep the pages turning. For my non-professional readers, that has been sufficient. But your agent is going for wider audience appeal and wants the first five pages to knock it out of the ballpark. I’m just a first-time novelist. The book needs to grab the reader so that even if they ask “Janie who?” they’ll still hand over their credit cards to find out what happens to the character.

After some analysis, I realized that while my story does have an over-arching dilemma (c’mon, I do know enough to set a challenge for the protagonist) and that it’s there implicitly, right from the start, I didn’t bring it in explicitly right at the start. The explicit revelation of the ghost’s dilemma didn’t come into the story until two-thirds of the way through the book. My goal then, was to revise the first five pages and bring in the MacGuffin. To bring in the MacGuffin this early in the game, my first five pages also had to make room for more words, introduce someone important sooner, and introduce some story elements sooner.

This involved ripping out some of my nicest prose – and it’s amazing how easy it is to “murder your darlings” when you realize they’re in the way of a tighter and better opening. I made some other revisions to the rest of the novel to do with consistency of action and characters, dialing up motivations, etc. Fortunately I didn’t have to make any structural changes. I feel like I got off easy.

But back to the necessity of bringing in the MacGuffin sooner. Was that a recommendation just for this book or is it a trend in general? I recently read Of Human Bondage, and it opens with a young boy and his dying mother. The story follows the life of the orphaned boy into adulthood, his life and secisions. Wuthering Heights is one of my favourite novels, but not for the opening, where the tenant is wandering lost on the moors. It takes quite a while before Nelly settles down to telling the story of Heathcliff and Catherine. Then I thought of how impatient I get nowadays with my own reading, how often I plow through the first 50 pages of a volume with grim determination because it’s a classic novel or it’s supposed to get really interesting, or because It's Good For You to Read This.

We live in a world of instant online gratification and one-hour dramas, podcasts and 140-character communications. We have been conditioned to quick starts. That's our audience, if you're writing commercial fiction. So … send in the MacGuffins!

Think of a favourite book, spot the MacGuffin, and tell me about it below!