This did not make the final edit. But I love it so much! 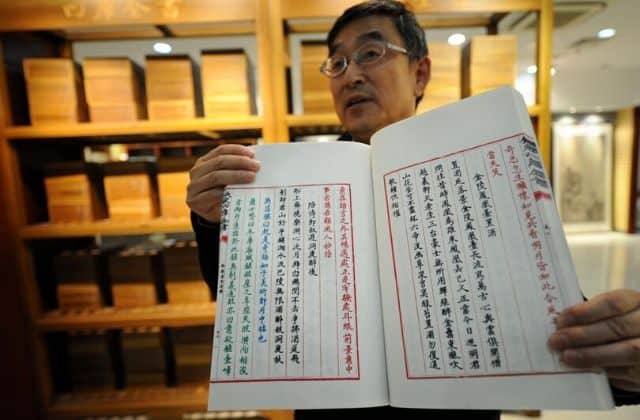 A Brief History of the Library of Legends

In 1450 the Jingtai Emperor, seventh ruler of the Ming dynasty, ordered the scholars of his court to compile an encyclopedia of Chinese art and culture[1]. It was an ambitious project and the most respected Imperial scholars were assigned as editors for each of the categories. The categories we know of are: poetry, painting, calligraphy, literature, philosophy, epic history, legends and folk tales, drama, and essays.

The editor charged with compiling the legends and folk tales was Yao Guangshu. According to Yao’s own notes, hearsay and second-hand narratives were not accurate enough. He sent lower-ranked scholars to track down the sources of legends. Ming-dynasty China stretched from the shores of the East China Sea to the western deserts, from tropical forests in the south to the northern steppes beyond the Great Wall. Travel conditions were uncertain and often dangerous, but imperial edict forced the scholars to travel across China, chasing down tales of mountain ghosts and clever demons, shape-shifting animal spirits and shaman exorcists.

The scholars climbed forest paths, miserably hunched under straw capes dripping with rain, to query villagers on the particulars of some folk tale. They shone torches upon the walls of ruined temples infested with vermin and poisonous insects, to decipher the words of an ancient saga. They rode, inexpertly and precariously on sturdy, short-legged ponies across high desert plateaus to search out nomadic tribes who could validate the details of a legend.

Records show that the Jingtai Encyclopedia consumed the life of 2,100 scholars for four years. The completed work numbered more than 11,000 volumes. The Legends and Folklore category made up 147 of those volumes. But when it came time to print the Encyclopedia, the Imperial treasury was running low. Without funding, the government’s printing house[2] couldn’t hire the artisans needed for this massive project, one that required the services of calligraphers and woodblock carvers, book binders and ink grinders. Fortunately for the printing house, the Jingtai Emperor died before they had to explain this to him. The one and only manuscript of the Encyclopedia was sent to the Imperial Legends for storage.

More than one hundred and thirty years later, in 1557, fire broke out in the Forbidden City. Three palaces burned down and the Imperial Legends narrowly escaped destruction. The Head Librarian suddenly realized the Jingtai Encyclopedia could’ve been lost forever under his management. He offered the Encyclopedia to the Hanlin Academy[3], far away from the main palace.

But Peking came under siege during the Boxer Rebellion of 1900. Fire in the Foreign Legations quarter spread to the Hanlin Academy. Some argue with good reason that the Academy library lost more to looting than to the fire, but the indisputable outcome was that the Jingtai Encyclopedia was as good as destroyed. Only 60 random volumes out of 11,000 survived.

But never think the Gods pay no attention to the woes of men. When Minghua University opened in 1912, its library received a magnificent bequest.

Yao Guangshu, that long-ago editor of Legends and Folklore, had kept a working copy of the Legends and Folklore manuscript. He stored these 147 volumes, which he considered the proudest achievement of his career, at his ancestral home in Nanking. He built a special room, its door marked by a modest wooden plaque: The Library of Legends. The books survived for five hundred years while the Yao family cycled through prosperity and poverty. The Library remained sacrosanct, rarely mentioned outside the clan.

By 1912 the Yao family’s last remaining descendant was elderly, unable to safeguard such a treasure. She donated the volumes to Minghua University.

My article for TIME Magazine about the real library behind the Library of Legends: The Risky Journey That Saved One of China’s Greatest Literary Treasures

[1] The fictional history above is based upon the history of the world’s first encyclopedia, the Yongle Encyclopedia, compiled during the Ming Dynasty reign of the Yongle Emperor. It was completed in 1408 after 4 years of work by 2,169 scholars under the leadership of a single senior editor. It covered numerous subjects such as: agriculture, art, astronomy, drama, geology, history, literature, natural sciences, religion, and technology. It comprised 22,937 manuscript rolls in 11,095 volumes. http://www.latimes.com/entertainment/arts/culture/la-et-cm-huntington-library-chinese-yongle-encyclopedia-20141015-story.html.

The travels of The Library of Legends is based upon another encyclopedia compiled later during the Qing Dynasty, the Siku Quanshu, which comprised 36,278 volumes and more than 77,000 chapters. This was kept together by private collectors, protected during the war by Zhejiang University faculty and students, stored in a cave during WW II with two caretakers, and brought back to Zhejiang University after the war.

[3] https://www.britannica.com/topic/Hanlin-Academy - you can still visit the Hanlin Academy!