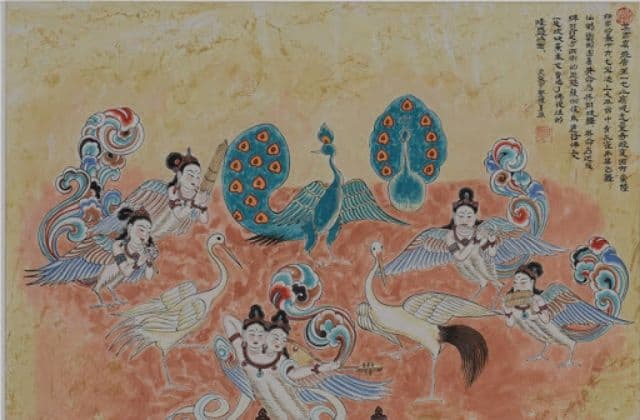 Painting from the Mogao Caves, a UNESCO World Heritage Site

The nun pointed to a sequence of three paintings. “These depict three of the Willow Star’s attempts. These paintings are only a few hundred years old, added during the Qing Dynasty.”

“These aren’t mentioned at all in the Legends,” Lian said. Excited, she set her lamp down on the cave floor, and pulled a notebook out of her rucksack.

“The story in my Legends book just says the Willow Star is still trying,” Lian said. “There aren’t any actual stories about her attempts during any of their reincarnations.”

“Minghua’s Library of Legends was compiled during the Ming Dynasty,” Sparrow said, “and these panels were painted later, during the Qing.”

“The tales themselves could be older than the Qing dynasty,” the nun said. She handed the oil lamp back to Sparrow and sat down on a stone ledge across from the murals.

Sparrow held up both lamps and moved along the cave walls, studying the paintings. Lian sat cross-legged, waiting for the nun to speak, pencil and notebook in hand.

In the first panel, a man is pictured in mid-air falling from a city wall, an arrow through his heart. Inside the wall, an old woman sits collapsed on the ground. She is grasping the hand of a younger woman, who kneels beside her. Their mouths are open, their faces identical expressions of sorrow as they watch the man fall. The young woman’s headdress is ringed with stars.

“Do you know the story?” Lian turned to the nun.

The old woman shrugged and pointed to a few lines of writing beside the panel.

Reincarnated and joined in a joyous marriage. The Prince dies defending the city against invaders. The Star vanishes the day after she buries her husband.

“In this reincarnation,” the nun said, “the Prince was born to a woman whose husband died when the boy was only a few years old. The Willow Star was reincarnated as a girl, daughter of a family in the same town, only a few streets and one bridge away. Even as a child her dainty beauty was evident. Fine eyebrows that drew a perfect arc against her pale skin, cheeks that invited comparison to lotus petals. Their families agreed the two should marry. It was a happy marriage and all seemed ordained by Heaven. But when their city came under attack, the Prince joined the local militia. During the defense of the city walls, an arrow pierced him. The young bride vanished the day after she buried her husband.”

The old nun gestured at Sparrow to move on to the next panel. There, a battle rages in the background. Horses and chariots, armoured soldiers, rippling banners. In the foreground a warrior has just plunged a sword into his enemy, who stands with open hands, not bothering to defend himself. His helm is decorated with stars.

“In this reincarnation, the Prince and the Star were cousins, grandsons of a great general,” the nun said, “Being orphaned, they were as close as brothers. They lived during a turbulent era when rival factions changed sides as often as the seasons. Their grandfather gave them each troops to command. But the Prince was proud and easily slighted. After an argument with his grandfather, he defected, taking his soldiers with him. The old general sent the Star to give chase. When their armies met on the northern plains, the Star sent a messenger to parlay but the Prince ordered his soldiers to attack. He rode straight for the Willow Star, who put up no resistance even as the Prince’s blade pierced through his armour and his heart.”

The nun waited for Lian to finish scribbling. When Lian looked up and nodded, Sparrow moved on to the next panel.

“This is my favourite of the three,” the old woman said. Two young women run through the streets of a town. It’s raining heavily and there are two red lanterns hanging in the air in front of them. One woman is richly-dressed, the other wears more simple clothing, but stars shine in the long braid that hangs down her back.

“In this reincarnation,” the nun said, “the Prince was born as a girl, the only daughter of a wealthy merchant. The Willow Star was born as a girl in the same household, a maidservant. The two girls were inseparable, best friends rather than mistress and maid. Her family married the Prince to a man from the other side of town. It was an unhappy marriage. The groom preferred young men and her in-laws blamed the Prince for her husband’s lack of ardour. Her only happy days were when her family sent the Willow Star to visit, bringing news from home. The Prince was not allowed to visit her family, not even when her beloved grandmother died.

"When this happened, the Prince could take no more and on a night of thunderous rainstorms, the Prince escaped out a side door where the Star stood waiting in the lane to take her home. The Prince told her astonished family that a pair of ghostly red lanterns had guided her through the streets. Her family decided the lanterns must have been sent by her grandmother and with such strong evidence of the old lady’s wishes from beyond the grave, the girl’s family took her back and the husband’s family kept the dowry. In all the excitement of that night, however, no one noticed that the maidservant was also sopping wet.”

“This was the happiest of the three reincarnations,” the nun concluded. “Although the Prince never recognized the Star, they lived out their days together. The Prince died of old age, quietly and in her sleep. The maidservant vanished the very next day.”

“So, the Willow Star was not successful in these three tries.” Lian said, her pencil scribbling rapidly across the pages of her notebook. “Do you know of other tales not documented in these caves?”

The nun burst into laughter. “There are other tales, I’m sure there are,” she cackled, “But these are the only ones that have been recorded. That I know of. Stay and look at the paintings as long as you like. I’m going back for afternoon prayers.”

She waved away the lamp Sparrow held out to her and caught hold of the double-knot rope. Eventually the shuffle of her cloth shoes died away.

“Sparrow, I’d like to make some quick sketches of these murals,” Lian said. “The oil lamps should be good for another half hour, shouldn’t they?”

“I’ll let you know when we need to leave, Miss Hu,” she said. “Take your time. Let me hold the light for you.”

She held up the lamps against the wall and Lian sketched quickly. In the flickering, uneven light, the crude outlines gained an elusiveness that allowed her to imagine sorrow on the faces of the two women watching the Lost Prince plunge to his death, to sense an urgency in the young women running through the streets of a rain-sodden town. One of the oil lamps flickered and she sketched faster, used another sheet of her precious drawing paper, sharpened her pencil again. Sparrow Chen never spoke, just moved along the wall, holding up the lamps as she drew.

“It makes me want to cry when I think how many stories have been lost from not being written down,” Lian said, squinting at the wall.

“Or how many tales have been twisted over time,” Sparrow said, “so they no longer resemble the original version. But you can’t blame storytellers. Whether in the marketplace or their own home, they shape the narrative to suit the audience.”

“It’s a sad story, don’t you think?” Lian said, “the Star trying again and again to get the Prince to see her, to really, really see her.”

“I like to think she moves forward each time with hope,” Sparrow said. “Hope that the Wheel of Rebirth wobbles slightly and gives her a chance. Hope that the goddess brewing the Tea of Forgetfulness leaves out a critical ingredient. Hope that something happens that allows the Prince to remember.”

“But she has hope. And therefore persistence,” Sparrow said. “The persistence of water, no matter how small a trickle, eventually carves a path through rock. And eternity is more porous than rock.”