C ity of Dreams is the first in Beverly Swerling’s series of historic novels about early Manhattan. The story begins in 1661 when the Turner siblings, Lucas and Sally, arrive in Nieuw Amsterdam with nothing to their name but their medical skills and no one to trust but each other. The novel’s timeline ends three generations later, at the close of the American Revolution.

Almost as soon as the Turners set foot on dry land we are given the measure of their intelligence and resourcefulness; Lucas is called to treat the Dutch governor, Peter Stuyvesant, and uses the opportunity to bargain for a better shop location inside the town walls as well as a parcel of land where they can live and grow the plants Sally needs to make her ‘simples’, the herbal remedies that support her brother’s practice.

By following Lucas and Sally as they struggle to establish themselves in what is still a Dutch colony, Swerling shows us the beginnings of New York City, which even then existed unabashedly and solely for commerce. The colonial town hustles with merchants and tradesmen, sailors, shopkeepers, bureaucrats, lawyers, prostitutes; there are Catholics, Protestants and Jews. 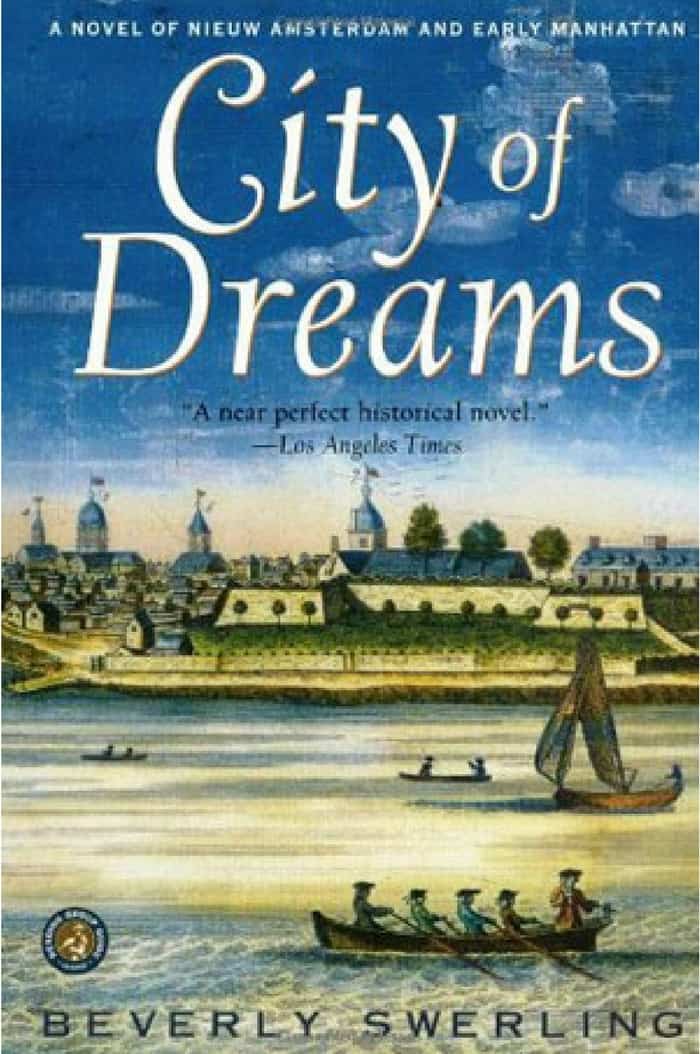 And there are the enslaved, because the town lives for profit and the slave trade is the most profitable of all. In the woods outside the town, native Indian tribes co-exist on the island with the Europeans, some hostile, some merely wary.

It is an unexpectedly diverse population and through the obstacles the young Turners face, we become acquainted with the local politics, prejudices, and beliefs of the era.

The novel also presents a society where women are chattels and people can be sentenced to death for moral transgressions. When Sally becomes pregnant after being raped, Lucas sells her in marriage to Jacob Van der Vries, an incompetent doctor who wants Sally for her simpling skills.

He tells himself it’s to save his sister from being punished but he knows it’s really because he wants the money to buy himself a wife. Marit Graumann is the most desirable woman he has ever met, married to a sadistic butcher who is willing to sell her to the highest bidder. As events turn out, Lucas does not have to pay for Marit after all, but Sally’s marriage creates a bitter division between the siblings. Sally never forgives Lucas for forcing her into marriage with a man she despises.

Thus begins the feud between the Devreys (as the Van der Vries become) and the Turners.

Lucas and Sally’s descendents carry on the family profession, with Devrey and Turner cousins in every generation who become surgeons, physicians, or apothecaries. The plot moves quickly to acquaint us with characters just as memorable as Lucas and Sally.

On the Devrey side is Red Bess, a feisty widow who was raised by her mother Sally to stay away from the Turners, but who appeals to Christopher Turner to operate on her tumour. Her death on the operating table creates even more enmity between the cousins while Christopher’s attempts at blood transfusion make him a pariah. Patients stop coming and his once-prosperous household falls to near poverty.

Christopher’s daughter Jennet, whose gender prevents her from becoming a surgeon, marries Solomon Da Silva, the wealthiest man in Manhattan, and a Brazilian Jew. She does this after her cousin Caleb Devrey pleads with their parents to let them marry, but then he spurns her, adding to the hostility between the families.

Swerling’s descriptions make it impossible to turn away from the horror show that was, in its time, state of the art medicine. She could not have chosen a more riveting profession to pull the reader into time and place. Cupping and bleeding were prescribed for nearly everything, all but the most basic surgery was viewed with suspicion, variolation (inoculation) too new and therefore prohibited, and the nature of blood transfusions not yet understood.

Human frailty, misunderstandings, pride, lust, and revenge drive the story forward, aided by a backdrop of politics, war, uprisings by the enslaved, and finally, the Revolution. A lot happens in this book and at a fairly fast clip that keeps you turning the page. Not knowing much about that era, I found it a real eye-opener of a novel and thoroughly enjoyable.

One of the challenges of writing a historical novel is creating a multi-faceted view of a time and place. Otherwise you end up with a creation that resembles an early Hollywood period piece, all knights and ladies, without peasants or prostitutes; a historical setting that lacks verisimilitude. In a story such as City of Dreams that is already loaded with sub-plots, characters, and an ever-spreading family tree, how can you introduce characters and situations to create a fully-realized historical setting without adding more complexity?

Swerling accomplishes this by taking advantage of her characters’ medical professions. By using the patients who the Turners and Devreys treat, she paints a rich and revealing picture of the pre-Revolutionary citizens of Manhattan, from the disenfranchised to the purveyors of power. These are characters with straightforward justifications for coming in to the doctors’ offices and in to the story.

Some patients and their families play a part in the machinations of plot while others serve only to illustrate prevailing attitudes or offer a glimpse of lives both squalid and privileged. Swerling avoids overusing this device, and manages to introduce a diversity of human conditions in an entirely natural and unforced manner – for what is more natural than for people to fall ill and seek out a doctor, no matter their status?

She achieves a densely layered rendering of the novel’s world without having to justify more subplots. There is narrative and exposition, prose which contributes to time and place; but for me it is the scenes between doctors and patients that vary the pace of the book, add immediacy, and most of all, put a human face on the social problems of the age.

It makes me think about other settings that would allow you to take advantage of a natural crossroads of humanity. Marketplaces, perhaps, or a public park. A ship full of immigrants. I will continue to ponder places where all walks of life would meet and mingle naturally.